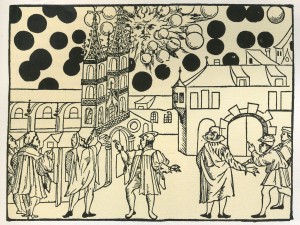 An example of earlier celestial displays of interest is illustrated in… this… broadsheet… from Basel.

Five years after the Nuremberg event, a similar sighting was reported by the Gazette de Bâle, published in the patois of the day by Samuel Coccius, “student in sacred writings and the liberal arts”:

“On 7 August 1566, at sunrise, were seen many large black spheres in the air which headed at great speed towards the sun, then made a half-turn, colliding with one another as if fighting; many became red and fiery, ending by being consumed and vanishing.”