1947.04.24c 12.05c [This case] is reported by James F McDonald in T Bloecher’s book [Report on the UFO Wave of 1947] on an intense period of UFO activity in 1947.  The report was made twenty years after the sighting to Professor McDonald for the reasons given at the end of the quotation. “Mrs Olavick was […]

1947.04 In April a meteorologist tracking a balloon instead found himself observing a saucer-shaped object. (UFOs 1947-1987: The 40-Year Search for an Explanation, Evans and Spencer)

1947 Ms [Marian] Anderson, of Madison, said her own interest in UFOs dated back to 1947, when she and others watched silvery, soundless objects fly over Stoughton, twenty miles east of Belleville. “There were nine of them, in a perfect row,” she said.  “We stood on the corner on Main Street and watched them go […] 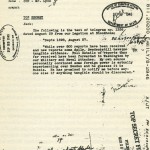 1946 According to Flying Saucers Have Landed [Adamski], Adamski had his first sighting in 1946 – a year before Kenneth Arnold’s. (The Complete Book of UFOs, Hough and Randles) [LUFORU assumes Adamski’s sighting was in California.  Pointer on map below placed randomly in California.]

1945.12.05 15.50c One group of five planes, a flight of Navy TBM Avengers, on a mission from the Fort Lauderdale Naval Air Station, on December 5, 1945, were the object, along with the Martin Mariner sent to rescue them and which also disappeared, of one of the most intensive ground-sea rescue operations ever conducted, although […]

1945.02 In September 1992 Greenwood started reading a three-feet-thick file of all the mission records for the 415th between autumn 1944 and spring 1945.  He found that sightings continued right up to the end of the war.  Intriguingly, among these documents… were the records of American foo fighter sightings during February 1945.  There were two […]

1945.01.02 The New York Times of 2 January 1945 reported several other cases of foo-fighters seen over France over a period of several months. (UFOs 1947-1987: The 40-Year Search for an Explanation, Evans and Spencer) On 2 January 1945, stories appeared in the press in many countries, using the term “foo fighter” and still implying […]