1943.08.06 Six days before the final [invisibility] test on the [USS] Eldridge, three UFOs appeared over the ship. (The Montauk Project: Experiments in Time, Nichols) 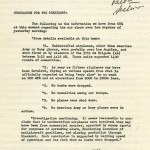 1942.02.26 From George Marshall to Franklin D Roosevelt [Click on image below to clarify and enlarge] SECRET File Record section OCS 21347-86 February 26, 1942. MEMORANDUM FOR THE PRESIDENT: The following is the information we have from GHQ at this moment regarding the air alarm over Los Angeles of yesterday morning: “From details available at […] 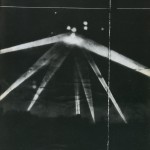 1942.02.25 This damaged and retouched photograph by a Los Angeles Times reporter shows searchlight beams converging on a mysterious aerial intruder over the Culver City area of Los Angeles on the morning of 25 February 1942.  The UFO can just be made out.  The small blobs of light are not UFOs, but bursts of anti-aircraft […]

1936 But eventually I found myself in possession, holding two documents: one called Project Grudge, another one called Operation Majority.  Project Grudge contained the history of alien involvement since around 1936, and it began talking about Germany’s involvement with a crashed disk that they had recovered in 1936 and [of which they] were attempting to […]