This was, however, just one of a series of crashes of UFOs in the great desert areas of New Mexico and Arizona.  Following the Roswell incident there were others.  At Paradise Valley, Arizona, in the same year…

Several years ago, a grizzled miner came up to me one night in Cave Creek, after I emceed a “Meet the Candidates” forum, and what he said shocked me.  I only knew this man as “Pete the Miner” who worked the famous Mistress mine near Seven Springs.  “You’re not going to believe this,” he said, “but a friend of mine watched some Government agents, back in the late 1940s, recover and truck away wreckage of what looked like a flying saucer.  He told me to look it up in the book by Timothy Good Above Top Secret.  Sure enough, on page 394, there it was, a description of a UFO crash just south of the present-day Carefree Highway.  So the story goes, the Cave Creek landfill was placed there to cover the site.  The landfill is closed now.

Debris, along with dirt, was trucked down to be placed in the Dreamy Draw dam along Northern Avenue, a dam that many experts say was never necessary, and finally, Cave Creek Road was “bent” or aligned further to the east.

I was equally astonished when I told then Phoenix city-councilwoman Francis Barwood about this and she decided to investigate.  She called me soon afterwards to tell me that many of the records involving whatever had happened were no longer available or had been destroyed!  There were markings on the old quadrangle map that showed the alignment for Cave Creek Road moved, an alignment that would have taken it toward the crash site.

Decide for yourself; watch the rare interview, done by MUFON, with the last surviving witness, Paradise Valley businessman and pilot Selman Graves, who has since passed away.  As a young man, he was the one sitting by the Go John mine, watching what must have been an incredible sight.

The object – there were men and there were vehicles – the object was large compared to the size of a house as far as saying how big it was across and so forth, which, I learned later, that was approximately 36 feet.  We had no idea what we were looking at, and we kicked things around – in fact it’s the first thing that we said was “The Air Force sure didn’t fly this thing here.”  You know, “What are they doing?  Why wouldn’t they do it somewhere else?  Maybe it’s something,” even, we thought, “maybe this is something to do with solar energy collection, some sort of a firing.”  But in any case, there was nothing that made sense of its being there instead of being on one of the bases.  We had arrived there at about 10.30 in the morning and when we left it was about 10.30 at night.  After we had finished looking at the shafts and seeing everything that could be seen and it was getting late in the afternoon, we returned to Salyer’s house.  We didn’t leave there till about 10.30 at night because there were some other men that came on the scene that detained us with various questions and so forth.

… Air Force or whatever people you saw, were there any right in the close proximity to the object, or was they…

Oh, there were many – yes, they were close to it, those that we saw from the hillside.  Yes.

OK.  So you could say that maybe some were even in touching range or on [inaudible]…

Whatever, this wasn’t new that day, that’s for sure.  They’d had the time to look about, I suppose build these, put this – they had this temporary shelter, a tent-like building, whatever, put up – and have, and be there with vehicles..

And now this, is this…

OK, did you personally see any entities, any bodies at all?

But when you had earlier checked the deep freeze at your home?

When we, when Salyer first arrived, he was of considerable concern that we not go near the deep freeze – that it was contaminated and that we might get ill from it.  We…

Selman Graves describing a recovery operation of an object.  He was the last living witness to a flying saucer operation near Cave Creek, AZ.  He has since passed away.

Eat your heart out, Roswell

Phoenix man claims to have seen UFO crash 50 years ago

PHOENIX (AP) – Forget Roswell.  One man says Phoenix was the site of a UFO crash 50 years ago.

Selman Graves says he saw it – a silvery dome in the desert north of town.  He was rabbit-hunting with another man on that day in 1947.

However, the friend says he doesn’t recall such a close encounter.

“What we saw can best be described as a large aluminium dome-shaped thing sitting upright in the desert,” Graves told The Arizona Republic.  “I thought it might be some kind of observatory dome, except why would a dome be down at that elevation?”

Graves estimated the dome was 36 feet in diameter and maybe a mile away.

He also remembered seeing five men and two trucks near the dome.  One looked like a military transport truck, capable of carrying personnel or equipment.

“But I didn’t see any equipment like cranes or anything like that,” Graves said.  “And the men didn’t seem to be doing any work.  I could not identify a uniform.”

Graves, who now lives in Prescott, also wonders whether a friend, Walt Salyer, who lived near the site, knew more than he let on.  Graves, who was 22 at the time, had drive to Salyer’s home with his brother-in-law Bob Malody to go rabbit-hunting.

Salyer wasn’t home when they arrived and seemed agitated they were there when he showed up, Graves recalls.

“Then he told us we would not be able to go hunting due west because the Air Force had restricted the area, and that if we fired our guns in that direction, we could hit someone.”

Later, back at Salyer’s ranch, “there were men running around in the basement asking us questions about what we saw,” Graves said.

“I’m not sure what I told them,” he said, explaining that he thinks he and Malody may have been subjected to some form of hypnosis, “but I do remember telling myself not to forget.”

Malody says he doesn’t remember the dome incident, but he doesn’t discount his brother-in-law’s sighting.

“Sel would like me to get hypnotized,” Malody said.  “But my feeling is, why bother?  Sel honestly believes in this stuff and as far as what he saw I don’t doubt it.”

Graves said he didn’t even consider that he’d seen a UFO until 1952, when he read the book “Behind the Flying Saucers.”  In it, ufologist Frank Scully said he was told by an informant that two humanoid bodies about 4½ feet tall were taken from a UFO that crashed north of Phoenix.

Don Devereux of Phoenix, a former newspaper reporter in suburban Scottsdale who now consults for television’s “Unsolved Mysteries,” told the Republic he met a man who claimed he was present at a bar when Salyer told others he had stored alien bodies from a crashed flying saucer in his freezer. 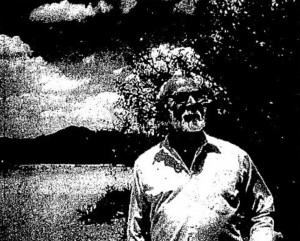 Selman Graves poses on June 13 near the area in Cave Creek where he says he saw “a large aluminium dome-shaped thing” after it crashed on the hill in the background in October 1947. (The Associated Press)