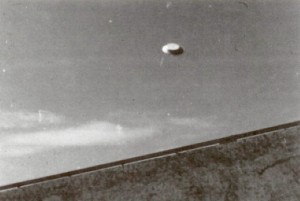 A couple was driving away from Belotić on the mountain highway system, when they saw a strange object hovering in the sky above.  They quickly grabbed their camera and took some photos of this amazing object in the sky.  The couple decided they wanted to stay anonymous, therefore there’s no name associated with this photo.  The picture shows a hat-shaped UFO.  Thirteen years earlier, Mr Rex Heflin observed the same hat-shaped UFO near Santa Monica.  Six years earlier, Mr Amiel Barnea of Cluj saw the same-shaped UFO.  Lastly, this object was amazingly similar to the famous object captured on video from the Nellis Air Base.

According to CUFOS files, the hat-shaped object remains unexplained.