Two… independent sets of observers in other parts of Seattle reported seeing multiple discs about half an hour before Ryman took his photos.

That night an incident occurred which was second only to Arnold’s sighting in terms of media coverage.  Captain [Emil] J Smith and First Officer Ralph Stevens of United Airlines Flight 105 were the chief witnesses.  Shortly after takeoff from Boise’s Cowan Field at 9.04 pm MST, they observed from their DC-3 airliner five discs “silhouetted against the sunset in a loose formation.”  When Smith asked Stewardess Marty Morrow to come forward, she confirmed the observation.  Ironically, before the crew boarded the plane, someone had asked them if they had seen any flying saucers – as the disc sightings were by then starting to receive more and more publicity.  Smith snapped back with a smile that “I’ll believe them when I see them.”

In that dark cockpit Smith remembered his famous last words as they watched the mysterious sight for several minutes as four more discs joined the group just as the original five faded from sight.  The second group flew in a straight line formation of three together with the fourth one off by itself.  Smith said “This group seemed to be higher than our flight path,” (then at 7,000 feet) “and when they did leave, they left fast!”

“We saw them clearly.  We followed them in a northeasterly direction for about 45 miles.  They finally disappeared.  We were unable to tell whether they outsped us or disintegrated.”

The sightings lasted twelve minutes…  At one point Smith recalled that it looked almost as if some of the discs merged together.  Reaching a cruising altitude of 8,000 feet, Smith had attempted to close in for a better look as the discs neared Oregon but could not attain an airspeed much above 185 miles per hour.  At that point he contacted the nearest observer he could reach – the radio tower at Ontario, Oregon.  The attendant there could not see anything, yet neither could the pilots by that point.  The objects had suddenly sped out of the area at tremendous speed. 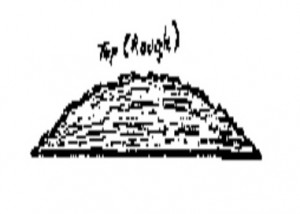 This sketch depicts the only details the crew could definitely give to Intelligence officers – thin oval craft “smooth on the bottom and rough on top.”  Smith told the International News Service that the mysterious objects “were as big as an airplane but definitely were not aircraft.”  This sighting ended up in Air Force [Blue Book] files as the third of nine in 1947 records to receive the sparingly-given designation “unidentified.”  Known as the United Airlines Flight 105 Case, it was second in fame only to the Kenneth Arnold sighting during 1947.  This would be only the first of four cases involving United Airlines flights over the following six weeks.

The news media was already waiting at Pendleton for a scheduled landing of the plane because many people had overheard the radio transmissions back and forth between Ontario tower and Flight 105.  As a result, the story became an immediate sensation.  Both Naval Intelligence and Brown and Davidson from Army Intelligence interviewed Captain Smith.

The Brown and Davidson interview occurred on July 12th just after they had finished talking with Kenneth Arnold at the Hotel Owyhee about his incident.  Arnold then invited them to his home for coffee and sherbet.  While at Arnold‘s house they heard Smith was in Boise for a layover, so they all went out to the airport to talk to Smith and were joined by Dave Johnson from the Boise Evening Statesman. 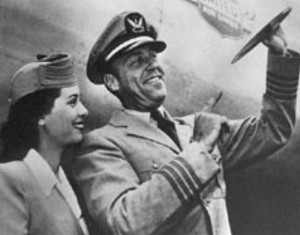 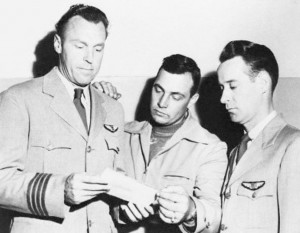