From DM Ladd to EG Fitch

[Image of page 1 not available] 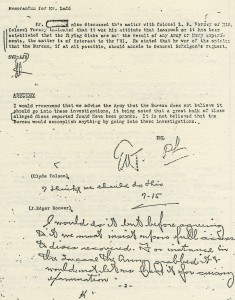 At request of Brigadier General George F. Schulgen, Chief of the Requirements Intelligence Branch of Army Air Corps Intelligence, Special Agent xxxxxxxxxxxxxx discussed the above captioned matter with him on July 9, 1947.  General Schulgen indicated to xxxxxxxxxxxx that the Air Corps has taken the attitude that every effort must be undertaken in order to run down and ascertain whether or not the flying disks are a fact and, if so, to learn all about them.  According to General Schulgen, the Air Corps Intelligence are utilizing all of their scientists in order to ascertain whether or not such a phenomenon could in fact occur.  He stated that this research is being conducted with the thought that the flying objects might be a celestial phenomenon and with the view that they might be a foreign body mechanically devised and controlled.

General Schulgen also indicated to Mr. xxxxxxxxxxx that all Air Corps installations have been alerted to run out each reported sighting to obtain all possible data to assist in this research project.  In passing, General Schulgen stated that an Air Corps pilot who believed that he saw one of these objects was thoroughly interrogated by General Schulgen and scientists, as well as a psychologist, and the pilot was adamant in his claim that he saw a flying disk.

General Schulgen advised Mr. xxxxxxxxx that the possibility exists that the first reported sighting of the so-called flying disks were fallacious and prompted by individuals seeking personal publicity, or were reported for political reasons.  He stated that if this was so, subsequent sightings might be the result of a mass hysteria.  He pointed out that the thought exists that the first reported sightings might have been by individuals of Communist sympathies with the view to causing hysteria and fear of a secret Russian weapon.

General Schulgen indicated to Mr. xxxxxxxxxx that he is desirous of having all the angles covered in this matter.  He stated that reports of his scientists and findings of the various Air Corps installations will be available in his office.  He advised that to complete the picture he desired the assistance of the Federal Bureau of Investigation in locating and questioning the individuals who first sighted the so-called flying disks in order to ascertain whether or not they are sincere in their statements that they saw these disks, or whether their statements were prompted by personal desire for publicity or political reasons.  General Schulgen assured Mr. xxxxxxxx that there are no War Department or Navy Department research projects presently being conducted which could in any way be tied up with the flying disks.

General Schulgen indicated to Mr. xxxxxxxx that if the Bureau would cooperate with him in this matter, he would offer all the facilities of his office as to results obtained in the effort to identify and run down this matter.

Mr. xxxxxxxxxx advised General Schulgen that his request would be made known to the Bureau and an answer made available to him as soon as possible.

Mr. xxxxxxxx also discussed this matter with Colonel L. H. Forney of MID. Colonel Forney indicated that it was his attitude that inasmuch as it has been established that the flying disks are not the result of any Army or Navy experiments, the matter is of interest to the FBI.  He stated that he was of the opinion that the Bureau, if at all possible, should accede to General Schulgen‘s request.

I would do it but before agreeing to it we must insist upon full access to discs recovered.  For instance in the [La?] case the Army grabbed it and would not let us have it for cursory examination.

The FBI memorandum from Fitch to Ladd, along with the addendum, wherein Army Air Force Intelligence asks the FBI to assist in the investigation [of UFOs]…

In early 1947.07 Brigadier General George Schulgen, an Army Air Force Intelligence Officer, was already requesting various military bases and intelligence agencies to cooperate in collating reports on the waves of UFO sightings.  The press was full of them, but he wanted first-hand data…

[On 1947.07.10 Fitch] from the FBI circulated a memo under the heading “FLYING DISKS”.  He told how Schulgen had urged that every effort must be undertaken in order to run down and ascertain whether the flying disks are a fact and, if so, to learn all about them.  According to General Schulgen the Air Corps Intelligence are utilizing all of their scientists in order to ascertain whether or not such a phenomenon could in fact occur.  He stated that this research is being conducted with the thought that (they) might be… a foreign body mechanically devised and controlled.

Key people within the FBI appended their comments as to whether such cooperation with the military was appropriate.  Assistant Director David Ladd was reluctant, referring to recent cases in which small discs had been found and investigated by military bodies but which as a rule were ‘found to have been pranks’.  The top man, however – none other than J Edgar Hoover – added his own thoughts in a handwritten note, saying that he would recommend cooperation but that before agreeing to it “We must insist upon full access to disks recovered.  For instance in the La case the Army grabbed it and would not let us have it for cursory examination.”

Hoover then endorsed the endorsement.  He wrote, “I would do this but before agreeing to it we must insist upon full access to discs recovered. For instance, in the La case the Army grabbed it and would not let us have it for cursory examination.”

But Hoover’s handwriting was sloppy and the crucial point, the location, as “in the La case” has been disputed for years.  It seems that it can also be read as Sw or Sov or 2a.  Of course, if it said Sw then that could refer to the Roswell case.

After [the Muroc incident], classified orders to investigate all UFO reports were rapidly issued.  Findings were to be forwarded to the Technical Intelligence Division (TID) of the Air Materiel Command at Wright Field…

As the evidence was gathered through July, TID staff naturally speculated on the origin of the mystery disks.  No one seemed to doubt their reality.

One faction at TID put forward the argument that they were alien spacecraft or even animals.  But by the end of the month the consensus of opinion was that they were most likely advanced Soviet aircraft, possibly developed from German designs captured in World War II.

In 1947 – 48, the first UFO reports were channeled to the Air Technical Intelligence Center (ATIC) at Wright-Patterson Air Force Base in Dayton, Ohio – the agency responsible for analysing intelligence information of interest to the Air Force.

Perhaps mindful of what had occurred recently in Scandinavia, a military enquiry was launched in… secrecy.  The Americans knew that if advanced craft were flying the skies they were not the product of Uncle Sam and so, potentially, were a threat.

The Soviet Union did not have the resources or technology.  Gradually the team of experts and scientists reviewing the rapidly expanding evidence contemplated the awesome thought that craft might be arriving from somewhere off the Earth altogether.