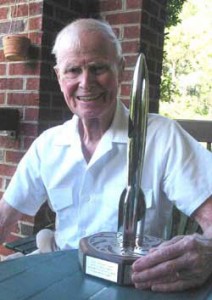 Frederick Durant was a key advisor to the U.S. military, intelligence, and civilian space-flight programs of the 1950s and ’60s.  He served as president of the American Rocket Society in 1953 and president of the International Astronautical Federation (IAF) from 1953 to 1956.  During the 1950s he worked for several different aerospace organizations, including: Bell Aircraft Corp., Everett Research Lab, the Naval Air Rocket Test Station, and the Maynard Ordnance Test Station.  He later became assistant director of astronautics for the National Air and Space Museum of the Smithsonian Institution, in Washington, D.C., helping to launch the modern facility millions of visitors tour each year.  While at the Smithsonian, he was tapped to serve as the aerospace historian for the Encyclopaedia Britannica…

As a civilian in the 1950s, he became one of the most respected independent advisors to the U.S. government on aerospace technology.  He served on a Central Intelligence Agency panel in 1953 studying the possibility of extraterrestrial spacecraft as a potential threat to national security, co-authoring a report that concluded there was ”no evidence that the phenomena indicate a need for the revision of current scientific concepts.”

Durant sat on the CIA-convened Robertson Panel in 1953.