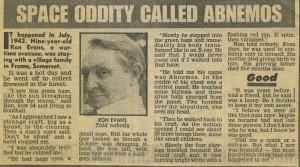 IT happened in July, 1942.  Nine-year-old Ron Evans, a wartime evacuee, was staying with a village family in Frome, Somerset.

It was a hot day and he went off to collect firewood in the forest.

“I saw this green haze, like the sun streaming through the leaves,” said Ron, now 54 and living in Southall.

“As I approached I saw a strange craft, big as a house, in the clearing.  Then a man’s voice said: ‘Don’t be afraid’ and a hand stopped me.

“I was absolutely terrified but he calmed me.

“He had large eyes, a small nose.  But his whole face looked as though a G-force was dragging it back.  He was tall, with long hair and wore a matt-grey skinsuit.

“Slowly he stepped into the green haze and immediately his body transformed like in an X-ray.  He said that I would never come out if I walked into that haze.

“He told me his name was Abnemos.  In the centre of his chest was a control panel.  He touched some buttons and three silver balls emerged from the panel.  Two hovered over my shoulders, one over my head.

“Then he walked back to his craft.  As the bottom opened I could see about 20 more beings there, some like small children.

“Slowly the four claw-legs buckled beneath the round craft, and it rose turning bright white with a flashing red rim.  It spun, then vanished.”

Ron told nobody.  Even then, he was used to confiding only in himself.  His mother died giving birth to him.  His grieving father died five months later.

“It was years before I told a friend, but he said I was a loony.  So I decided to keep it my own secret.

“I believe we were all like that man once.  Maybe we became bad and lost those powers.  I don’t know who he was, but I know he was good.

“Call me a crank or a nutcase.  But what I saw was beautiful – the most marvellous thing that ever happened to me.”