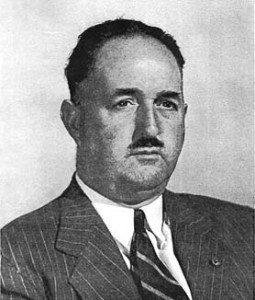 [Professor] Robertson… was an American mathematician and physicist known for contributions related to physical cosmology and the uncertainty principle.  He was Professor of Mathematical Physics at the California Institute of Technology and Princeton University.

Robertson made important contributions to Robertson to the mathematics of quantum mechanics, general relativity and differential geometry.  Applying relativity to cosmology, he developed the concept of an expanding universe, and predicted the redshift…

During World War II, Robertson served with the National Defense Research Committee (NDRC) and the Office of Scientific Research and Development (OSRD). He was Technical Consultant to the Secretary of War, the OSRD Liaison Officer in London, and the Chief of the Scientific Intelligence Advisory Section at Supreme Headquarters Allied Expeditionary Force.

After the war Robertson was director of the Weapons System Evaluation Group in the Office of the Secretary of Defense from 1950 to 1952, and Scientific Advisor to the NATO Supreme Allied Commander Europe (SACEUR) in 1954 and 1955.  He was Chairman of the Defense Science Board from 1956 to 1961, and a member of the President’s Science Advisory Committee (PSAC) from 1957 to 1961.

Robertson was the Chair of 1953’s CIA-convened Robertson Panel.