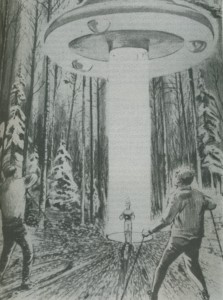 Close Encounter of the Third Kind

“I felt ill.  My back was aching and all my joints were painful.  My head ached and after a while I had to vomit.  When I went to pee the urine was nearly black, it was like pouring black coffee onto the snow.  This continued for a couple of months.”  These were the after-effects reported by one of two witnesses involved in an incredible encounter in the snow-covered forests of southern Finland in 1970.

It was late afternoon on Wednesday, 7 January 1970 when countrymen Aarno Heinonen and Esko Viljo were out skiing.  They paused in a small clearing to enjoy the few stars in the cold sunset.  After a short time they heard a buzzing noise and saw a bright light moving through the sky towards them.  As it neared them above treetop height, they saw a red-grey mist swirling around it and puffs of smoke emanating from it.  Inside the cloud was a circular, saucer-shaped object, metallic in appearance and some nine feet (274 cm) wide.  It had a dome above, and beneath were three spheres around the rim, reminiscent of the Adamski photographs of nearly twenty years earlier [1952.12.13].  From the base of the object a tube suddenly fired a sharp beam of light down towards the ground.  By this time the object had lowered itself to around ten feet (three metres) from the ground, almost within touching distance of the men.

If the witnesses were astonished now, the next instant was to take what was left of their breath away.  As Heinonen related, “I was standing completely still.  Suddenly I felt as if somebody has seized my waist from behind and pulled me backwards.  I think I took a step backwards, and in the same second I caught sight of the creature.  It was standing in the middle of the light beam with a black box in its hands.  From around the opening in the box there came a yellow light, pulsating.  The creature was about 35 inches (90 cm) tall, with very thin arms and legs.  Its face was pale like wax.  I didn’t notice the eyes, but the nose was very strange.  It was a hook rather than a nose.  The ears were very small and narrow towards the head.  The creature wore some kind of overall in a light green material.  On its feet were boots of a darker green colour, which stretched above the knee.  There were also white gauntlets going up to the elbows, and the fingers were bent like claws around the black box.

Viljo also described the creature as “luminous like phosphorus” and wearing a conical, metallic-like helmet [cf abductee on For the Love Of].  The creature was less than three feet (91 cm) tall.

Suddenly Heinonen was hit by the light from the box in the creature’s hands.  The forest became suddenly quiet, the red-grey mist drew down from the object and sparks could be seen flying into the snow.  The mist hid the creature and surrounded both the witnesses.  Suddenly the light beam disappeared and was sucked up into the craft, apparently taking the entity with it.  Then even the craft itself was gone!  Heinonen was paralyzed on his right side and Viljo had to almost carry his friend the two miles (three km) to their home.

Later, at the Heinola clinic they were examined and the doctor prescribed sleeping pills and sedatives.  He believed that the symptoms of aching joints and headache would disappear within ten days, but for Heinonen they continued for some time.  Some five months later he was still suffering from the same pains and although the paralysis of his right leg disappeared he could still not balance properly.

Heinonen’s memory was also severely affected and it got so bad that whenever he left home he had to tell his family where he was going so that they could search for him and collect him if he didn’t return! Viljo himself was not unaffected by the event; he had a red and swollen face and had become incoherent and absent-minded.

Dr Pauli Kajanoja stated “The symptoms he described are like those after being exposed to radioactivity.”  He added “Both men seem sincere; I don’t think they had made the thing up.  I am sure they were in a state of shock when they came to me; something must have frightened them.”

The experience was corroborated by two other people who reported UFOs in the sky at the same time and in the same area as the Imjärvi encounter.

For Heinonen it was not at an end; between the time of the encounter and August 1972 he reported 23 other UFO contacts.  Occasionally, he reported meeting with an extremely beautiful space woman and one entity very reminiscent of the Adamski Venusian who had progressed considerably beyond the mere telepathy of the Adamski encounter and was able to speak fluent Finnish.

These later claims have tended to create an atmosphere of disbelief even amongst hardened UFO researchers, but this is probably the failure of UFO researchers to understand the phenomenon for what it really is (an understanding that I feel is still a long way off for us all.)  Of those who knew the witnesses, one farmer, Matti Haapaniemi, a neighbour, stated “Many people in this neighbourhood have laughed at this story.  But I don’t think it’s anything to joke about.  I have known both Aarno and Esko since they were little boys.  Both are quiet, rational fellows and moreover they are abstainers.  I am sure their story is true.”

There were many other sightings of “distant lights in the sky” in the area around the same time as this event, which also added to the credibility of the case.

Witness fainted and was paralysed on the right side; headaches, vomiting, and difficulty breathing, pain all over, was cold, and could not keep his equilibrium; red, swollen face; hands and chest were covered with red spots, after object hovered in front of car and witnesses were caught in light projected by occupant from object