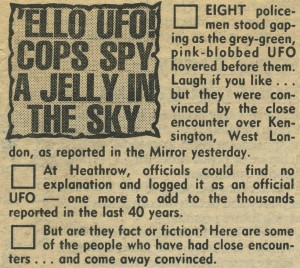 ‘ELLO UFO!  COPS SPY A JELLY IN THE SKY

EIGHT policemen stood gaping as the grey-green, pink-blobbed UFO hovered before them.  Laugh if you like… but they were convinced by the close encounter over Kensington, West London, as reported in the Mirror yesterday.

At Heathrow, officials could find no explanation and logged it as an official UFO – one more to add to the thousands reported in the last 40 years.

But are they fact or fiction?  Here are some of the people who have had close encounters… and come away convinced. 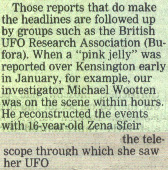 Those reports that do make the headlines are followed up by groups such as the British UFO Research Association (Bufora).  When a “pink jelly” was reported over Kensington early in January, for example, our investigator Michael Wootten was on the scene within hours.  He reconstructed the events with 16-year-old Zena Sfeir…

… the telescope through which she saw her UFO

A young girl reported seeing a UFO from her home in Kensington and it was reported to the police.  Initially one officer attended and corroborated her sighting.  So perplexed was the officer that he called for two more uniformed officers to attend the house.  They too in turn confirmed the sighting of the object.  In the end another five uniformed officers turned up, making eight in total.  The sighting lasted 40 minutes.