So there really was something of the night about Michael Howard.  The former home secretary was visited by extraterrestrial beings in the run-up to the last election, according to UFO-watchers near his home in Kent.

In a case worthy of The X Files, the claims were apparently covered up by a Conservative party media machine desperate to avoid embarrassing headlines and cartoons.

Senior Tory spin doctors say there were aware of the story, which appeared in a local newspaper, while Howard’s agent has admitted halting publication of further detailed reports about the incident in the paper by complaining to the editor.

The bizarre story began on the night on March 8, 1997, a week before John Major announced the date of the general election but with all the parties already firmly in campaign mode.

At 3am Sarah Hall, a reporter on the Folkestone Herald, was driving along Donkey Street in Lympne, near Hythe, when she heard a strange humming and stopped her car.  Ahead of her she saw a huge triangular craft hovering over a field.  Was it a spaceship or even an omen in the shape of Labour’s Millennium Experience?  “It had a large dome at one end and lots of bright lights around the sides and looked quite shiny.  I had no idea what it was.  I felt the hairs stand up on the back of my neck,” she said.  “After a few seconds it shot off and stopped 500 metres away.  It then moved and stopped four times before flying off.”

Her sighting was confirmed by Chris Rolfe, a local UFO spotter.  “This tallies with an unofficial account I was given that it was seen by two firemen hovering above Mr Howard’s house at the same time,” he said.  Eight separate reports were filed with local UFO spotters of a triangular craft, grey in colour, hovering in an area 15 miles around Howard’s home.

Hall wrote up her experience for her paper but was astonished to find that when it appeared, the location had been moved from near Howard’s home to the other side of the marshes at New Romney.

“Events seemed to have been relocated several miles away.  I don’t know how this came about; I have asked but have not been given an explanation.”

When Hall attempted to suggest in a later article that Howard’s home had been the real site of the visit, the Tories began to fight back.  Michael Buxton, Howard’s agent, telephoned the paper to complain: the stories stopped.

Neither the local police nor the Ministry of Defence have any record of an incident that evening, despite the series of sightings.  A police spokesman, however, said it might have been dealt with by Howard’s own police protection team.

Sheila Gunn, John Major’s press secretary, said last week she was aware of reports at the time of an extraterrestrial sighting, but the Tories had managed to keep them out of the national papers.  “It was all rather strange,” she said, “but then, that election campaign was pretty strange all round, wasn’t it?”

The case is now being pressed by Mark Watts, the Labour MEP for Kent East, who is asking the European parliament to investigate.  “There have been so many sightings from reliable witnesses – people can’t be suffering from mass hysteria,” he said.  “I was amazed the story never went further.”

Howard, who was last year described as having “something of the night about him” by Ann Widdecombe, the former prisons minister, was last night unavailable for comment.  The Tory party said it knew nothing about the Howard’s nocturnal visitors.  But then, given the home secretary’s responsibility for immigration, perhaps they were illegal aliens. 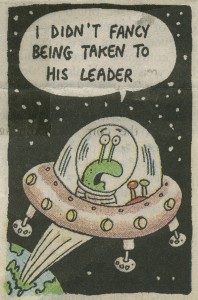