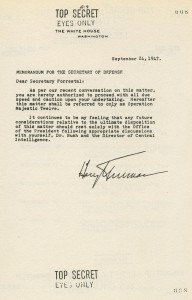 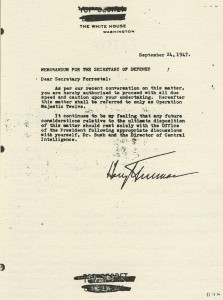 MEMORANDUM FOR THE SECRETARY OF DEFENSE

As per our recent conversation on this matter, you are hereby authorized to proceed with all due speed and caution upon your undertaking.  Hereafter this matter shall be referred to only as Operation Majestic Twelve.

It continues to be my feeling that any future considerations relative to the ultimate disposition of this matter should rest solely with the Office of the President following appropriate discussions with yourself, Dr. Bush and the Director of Central Intelligence.

[This page is under construction.  Read the Eisenhower briefing for some information on Majestic-12.]

Given that Vandenberg had such knowledge, it is of note that he rejected the conclusion of the US Air Force’s Estimate of the Situation, which was that UFOs were real objects which came from space.

It is therefore also of note that he was one of six people who sat on the Robertson Panel in 1953.01.  This panel’s report, according to Wikipedia, concluded that most UFO reports “could be explained as misidentification of mundane aerial objects, and the remaining minority could, in all likelihood, be similarly explained with further study. The Robertson Panel recommended that a public education campaign should be undertaken in order to reduce public interest in the subject…”

Twining wrote in the Twining-Schulgen memo to Brigadier General George Schulgen, Commanding General of the Army Air Force, of “the lack of physical evidence in the shape of crash recovered exhibits which would undeniably prove the existence of these objects.”

These four men dismissed cases of UFO sightings as non-substantial whilst knowing all along that they were the exact opposite – that they were indicative of an alien presence on Earth.

In 1947, President Truman established a group of twelve of the top military scientific personnel of their time.  They were known as MJ-12.  Although the group exists today, none of the original members are still alive.  The last one to die was Gordon Gray, former Secretary of the Army [in 1982].

As each member passed away, the group itself appointed a new member to fill the position.  There is some speculation that the group known as MJ-12 expanded to at least seven more members.

The mere existence of MJ-12 and its amazing fund of secret information remained unknown to anyone in the UFO community until December 1984, when a little-known researcher named Jaime Shandera, who had spent two years working on the Roswell cover-up story with William Moore, received an anonymously posted package containing photographs of two Majestic-12… documents…  Several years later the British ufologist Timothy Good also received a copy of the same documents.

Support that a UFO did crash near Roswell was bolstered up again in 1987, when English writer Timothy Good published for the first time alleged official US Government documents outlining how twelve men working for the US Government orchestrated the recovery and evaluation of a crashed disc that was removed from Roswell, New Mexico, in July, 1947.  A similar release of this so called “Briefing document: Operation Majestic 12” occurred several weeks later in the USA by the research team of William L Moore, Jaime H Shandera and Stanton T Friedman.

According to the documents, MJ-12 was a group of distinguished scientists, military and intelligence officials, established by President Harry Truman to control the recovery of UFOs.  Newspapers around the globe reported the allegations that the United States Government covered up a UFO crash landing, and recovered its occupants.  But no official spokesman would confirm that any of this was true.  How does one prove MJ-12 exist and the documents are real?

Canadian UFO researcher and nuclear physicist Stanton Friedman was awarded a $16,000 grant by the Fund for UFO Research to answer that question, and he has generated a great deal of information to support the validity of the documents.  Unfortunately for Friedman, and the rest of the research community, all the original designated MJ-12 members are dead, so any confirmation must come from secondhand information or locating other supporting documents to prove the case.  A progress report of his investigation was made at the 1989 Mutual UFO Network symposium, held in Las Vegas, Nevada.  Friedman reported there is “no indication that the documents are fraudulent and a host of small details which tend towards legitimacy for MJ-12.”

[Friedman, Shandera and Moore] soon claimed to have contacted a “highly placed military intelligence operative” who could authenticate the story…  [He was a] USAF sergeant – one Richard L Doty – an AFOSI agent who in 1980 had been involved in a… UFO sighting report while at Kirtland AFB, New Mexico.  He had already passed a doctored (and fake, the USAF says) AFOSI document to Moore that referred to “MJ Twelve”.  Also, in April 1983 Doty had shown the mute researcher and TV director Linda M Howe a “presidential briefing” (which president was not stated) on “unidentified flying vehicles” that described at length “extra-terrestrial biological entities” (EBEs) that had been retrieved from crashed UFOs.

In the course of the meeting he also mentioned MJ-12.  “MJ”, he said, stood for “majority”.  The twelve were a policy-making body in charge of contacts with extraterrestrials and directing the cover-up.

Working on the assumption that the Majestic-12 documents are possibly authentic, Canadian UFO researcher Grant Cameron and I found an anchor in which to conduct our own investigation.  We decided to pursue people, not documents.  Since the briefing document clearly states the project is a “TOP SECRET Research and Development/Intelligence operation responsible directly and only to the President of the United States”, Cameron and I went fishing for former members of the Research and Development Board who were active during the late 1940s and early 1950s.  Someone out there had to have knowledge of a project of this magnitude.

During our hunt, we discovered another researcher who had been doing a similar check, William Steinman in California.  Steinman, author of the book UFO Crash at Aztec, had been corresponding with Fred Darwin, the former executive director of the Guided Missile Committee for the Department of Defense’s R & D Board from 1949 to 1954.  Steinman asked Darwin who would be likely candidates for a flying saucer recovery operation, if there ever were such a project.  His reply is extraordinary, considering he named these people in 1984, three years before the Majestic-12 documents were made public.  Darwin listed the following names:

Bush and Berkner both appeared on the Majestic-12 list in 1987.  One name that came up that we found interesting was Dr Eric Walker, former president of the Pennsylvania State University.

The fact that Walker may be involved originated with American physicist Dr Robert I Sarbacher.  In the 1950s, Sarbacher was serving as a consultant for the military’s R & D Board and was a member of the Guidance and Control Panel.

In a September 15, 1950, interview with Canadian scientist Wilbert B Smith, Sarbacher told Smith flying saucers exist, “we have not been able to duplicate their performance” and the subject of flying saucers “is classified two points higher than the H-bomb.”  When the contents of this 1950 interview were made public through one of Leonard Stringfield’s monographs, UFO Crash/Retrieval: Amassing the Evidence – Status Report III in 1982, Steinman managed to find Sarbacher in Palm Beach, Florida, and wrote him for more information.

In a letter to Steinman dated November 23, 1983, Sarbacher confirmed he was “invited to participate in several discussions associated with the reported recoveries” (of UFOs) but that he was unable to attend the meetings.  Sarbacher stated that US laboratories analyzed that material that reportedly came from these flying saucer crashes and that the hardware was “extremely light and very tough.”  Sarbacher described the beings that controlled the flying saucer to Steinman.  He states:

“There were reports that instruments or people operating these machines were also of very light weight, sufficient to withstand the tremendous deceleration and acceleration associated with their machinery.  I remember in talking with some of the people at the office that I got the impression these ‘aliens’ were constructed like certain insects we have observed on Earth, wherein because of the mass the inertial forces involved in operation of these instruments would be quite low.”

In an October 1985 issue of the Flying Saucer Review, editor Gordon Creighton gave further details about Sarbacher‘s involvement in his article Top US Scientist Admits Crashed UFOs.  Creighton writes that although Sarbacher didn’t attend, the meetings about the recoveries were held at Wright-Patterson Air Force Base in Dayton, Ohio, where officials were to report their findings to scientists connected to the Defense Department’s Joint Research and Development Board.

During a telephone interview between researcher Stanton Friedman and Robert Sarbacher, he asked Sarbacher if he could recall anyone who attended those meetings.  Although he could not recall his name, he named enough clues to Friedman that, when William Steinman reviewed the conversation, all the evidence led to Dr Eric A Walker.  In the early 1950s, Walker was serving as executive secretary of the Research and Development Board, and would have been a logical candidate to be asked to attend UFO retrieval meetings, if they were held.  In a letter to Grant Cameron, Steinman said that when he made the discovery, he telephoned Sarbacher and asked him if Dr Eric Walker was the individual he was trying to remember.  Sarbacher‘s response, according to Steinman, was Walker was the man who attended all those meetings at Wright-Patterson Air Force Base.

If the evidence we have gathered is true, we now have identified a scientist who was in a position to confirm or deny the US Government’s crash-retrieval program.  Steinman states he telephoned Walker on August 30, 1987.  According to Steinman’s “word for word” telephone transcript of the interview, Dr Eric A Walker confirmed attending these meetings at Wright-Patterson AFB regarding the “military recovery of flying saucers, and the bodies of the occupants.”  According to Steinman, Walker acknowledged that he knew of MJ-12 and was familiar with them since 1947.  In the interview, Walker tells Steinman to “leave it alone,” that he is “delving into an area that you know absolutely nothing about.”  Steinman responds that the people have the right to know the truth, and that he is “not going to drop it.”

Steinman has been investigating Walker since 1984, and received several letters from Walker, one of which discusses a downed saucer.  Crain and Cameron teamed up in the fall of 1987 to learn as much as we could about Walker‘s involvement, before releasing his name to the public.

Although Dr Walker is being less responsive these days regarding inquiries into his past involvement with UFOs, Cameron and I believe we have gathered enough background material on Dr Walker to show he was in the right place at the right time to know if the United States has a crashed UFO in military custody.  A report of our findings has been assembled in a book, UFOs, MJ-12 and the Government, which we hope to release in the near future.