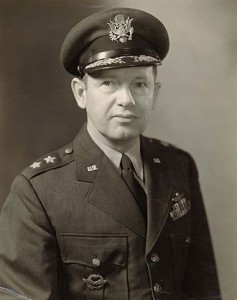 Laurence Carbee [sic] Craigie… was a United States aviator and United States Air Force general. He became the first U.S. military jet pilot in 1942 when he piloted the Bell XP-59.

Twining‘s suggestion [in the memo of 1947.09.23]} was endorsed by Schulgen; on 30 December the Chief of Staff at the Air Force, Major General Craigie, approved the project and ordered the creation of Project Sign.