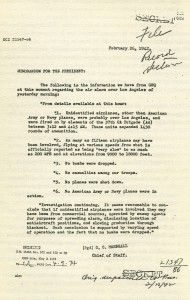 MEMORANDUM FOR THE PRESIDENT:

“2.    As many as fifteen planes may have been involved, flying at various speeds from what is officially reported as being ‘very slow’ to as much as 200 MPH and at elevations from 9000 to 18000 feet.

“4.   No casualties among our troops.

“6:   No American Army or Navy planes were in action.

“Investigation continuing.  It seems reasonable to conclude that if unidentified airplanes were involved they may have been from commercial sources, operated by enemy agents for purposes of spreading alarm, disclosing location of antiaircraft positions, and slowing production through blackout.  Such conclusion is supported by varying speed of operation and the fact that no bombs were dropped.”