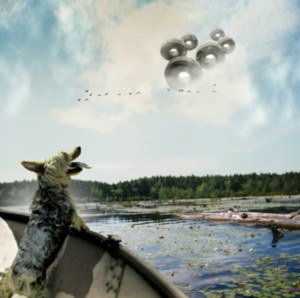 THE MAURY ISLAND INCIDENT: A SYNOPSIS

On 21 June, 1947, three days before Kenneth Arnold reported his observation of a formation of objects traveling like a saucer skipped across the water, a significant event occurred.

In Puget Sound harbor, between Tacoma and Seattle, Washington, Harold A Dahl, his teenage son Charles, two other crew members and the family dog were patrolling for salvage logs…

Dahl… spotted six large, round, metallic objects hovering about 1,000 feet in the air above Maury Island.  Dahl described the objects as being saucer- or round-shaped (newspaper reports described them as doughnut-shaped), about 100 feet in diameter, with a 25-foot area in the center that was either lit with bright light or consisted of a hollow cavity.  Dahl noted that there appeared to be round portholes or windows on the edges of the aircraft (some reports indicate the windows were located inside the inner lit area) and it was obvious to him that the unidentified objects were intelligently controlled.

Dahl and the other witnesses were on the eastern side of the island (at that time, Maury Island was not attached to Vashon Island via a causeway and the only way to reach the island was by boat) as they witnessed five of the objects circling a sixth object that appeared to be having mechanical problems.  The object in distress dipped slowly to about 500 foot above the water and hovered there silently.  After about five minutes, one of the objects broke free from the circle and lowered to join the ailing craft.  The two objects “touched” each other and remained in contact for several minutes.  As Dahl recalls, suddenly, one of the objects made a loud “thud” sound and the ailing UFO began spitting out pieces of metallic debris.  At first Dahl thought the object was dropping newspapers.

Flakes of material similar to aluminum and some additional material (which resembled cooled lava) fell around them.  Some fragments hit the boat and caused damage: one fragment injured Dahl‘s son and another killed the family dog.

One of the circling discs approached the malfunctioning disc and in some fashion “jump-started” it.  All of the discs then rose rapidly and vanished.

$200 seemed like such an enormous sum that when Arnold bragged at the office of the Idaho Daily Statesman, the editor sent a telegram to Air Force Intelligence to report about the event.

On the 1st of August, two Army Air Corps Officers, 1st Lt Frank M Brown and Capt William L Davidson, who had been sent to investigate the incident, were killed when their B-25 carrying the photographs and some of the alleged UFO residue mysteriously crashed. 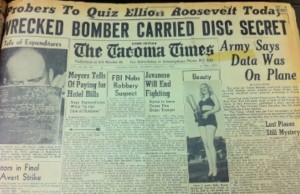 Army Says Data Was On Plane

According to a United Press report Monday, Brig. Gen. Ned Schramm, chief of staff of the Fourth air force at San Francisco, confirmed a story carried exclusively in the Tacoma Times Saturday that the planes had been on a disc mission.

The Times, which was the first newspaper to break the story, had been informed by an anonymous tipster that the fallen plane carried disc data at the time of the crash.

Still unconfirmed is the tipster’s statement that the crash was caused by sabotage.

It was revealed Monday that specimens obtained on Maury Island by two Tacoma businessmen are of a substance unknown to the University of Chicago metallurgists.

H.A. Dahl in the newsroom of The Tacoma Times told reports that fragments picked up at the island by himself and partner prior to the first sighting of the discs, were still unclassified by University of Chicago technicians.

On the 3rd of August Kenneth Arnold‘s airplane was sabotaged, and he narrowly escaped being killed in a crash.

Paul Lantz, the Tacoma Times reporter, died in “two weeks … and the cause of his death was not clear…  He lay on a slab in the morgue for about 36 hours while the pathologists apparently hemmed and hawed.”

Ray Palmer, editor of eight Ziff Davis publications, who had increased circulation of Amazing Stories from 80,000 to 130,000 and initiated the Maury Island investigation, was fired.

The Tacoma Times, a newspaper in business over 40 years, went out of business.

The Army Air Corps intelligence officer at Hamilton Field made the following recommendation in regard to Fred Crisman.  “That in view of the reported statements made by Mr Crisman that consideration be given to revoke his Air Reserve commission and flying status as an undesirable and unreliable officer…” (Lt Colonel Donald Springer, report of 1947.08.18)

But we know Crisman served 30 months flying in the Korean War.  Crisman also claimed wartime experience in the OSS…

THE ROSWELL CONNECTION: A JUMP-START MANEUVER

UFO lore often mentions the “jump-start” maneuver.  Sometimes it produces successful results, sometimes it ends in disaster.  The maneuver begins when one craft appears in trouble and descends towards the earth in a “falling leaf” motion.  A second craft approaches, and “kisses” the first hull to hull.  With this “kiss” an immediate effect is noted.

1975 Bogotá, Colombia: One craft drops residue, both fly away.

While the Maury Island episode occurred first, it was not investigated until three weeks after the Roswell crash.  This was time for the cover-up team to have the benefit of the Roswell experience.  This time instead of labeling the incident a misinterpretation, they simply called it a hoax.

THE SLAG FOUND AT MAURY ISLAND

One original cigar box of fragments was mailed by Dahl to Ray Palmer.  This box was stolen from Palmer’s office.  (What sort of thief wants a cigar box of slag?)  Before it was stolen, Palmer sent it out for analysis.  The results indicated it was neither slag nor natural rock.

THE SLAG FOUND AT ROSWELL

Kevin Randle picked up a piece of material from the Roswell crash site; it looked like grey pumice, had no weight to it, some stratification, and seemed very tough.

THE SHINY METAL FOUND AT ROSWELL

“Something on the order of tinfoil….”
(Mac Brazel‘s son)

“Immediately following this sound the center aircraft began spewing forth what seemed like thousands of newspapers from somewhere on the inside of its center.  These newspapers, which turned out to be a white type of very light metal, fluttered to earth, most of them landing in the bay.”
(Dahl speaking to Arnold)

“We also picked up some of the metal which looked like falling newspapers…  I related our experience to Fred L Crisman…  We gave him the camera with its film and the fragments of metal we had loaded aboard as proof of our story.”
(Dahl speaking to Arnold)

“I don’t have any of the white material here but Fred Crisman has a whole box full in his garage.”
(Dahl speaking to Arnold)

“On arriving at Maury Island I did find all the debris, lava rock and some of the white metal that Harold had told me about.”
(Crisman speaking to Arnold)

“Asked Crisman for some of the white metal as well as other fragments he had stored in his garage.”
Arnold speaking to Crisman)

“The next morning, July 31, Captain Smith and I were awakened by Crisman and Dahl.  Their arms were loaded with heavy rock fragments and Crisman had a number of pieces of the white metal that he said came from the aircraft that Dahl had spoken about.

Fred Crisman handed us a piece of the white metal.  Both Smith and I would grant that it was very light, but no more than the ordinary aluminum which certain sections of large military aircraft are made….  This piece of metal did not correspond with Harold Dahl‘s original description of the extremely light white metal.”
(Kenneth Arnold narrating)

“Major Sanders got up from his chair and made some remark about the fragments on the floor.  He nonchalantly started picking up a few…  Major Sanders had gathered up all the pieces and piled them on top of several towels.  He started to bundle them up, stopped short, turned to me and said, ‘We don’t want to overlook even one piece.  I would like to have them all.’  The major put out his hand to Captain Smith for his piece…”
(Arnold describing the last day in the hotel)

Note well: Dahl gave ALL the shiny metal to Crisman and Crisman apparently switched it with some old scrap aluminum.  Under no circumstance was Major Sanders, from Army Intelligence of McChord Field, going to allow any residue to be retained by Arnold and Smith.

AGAIN: WAS CRISMAN ABLE TO USE THE RESIDUE AS A DEVICE TO MAKE HIMSELF AN ASSET?

Fred Lee Crisman went on to lead a peculiar and interesting demi-monde life.  In 1968, less than two weeks before he was subpoenaed by New Orleans’ DA Jim Garrison in regard to the Kennedy assassination, his car was riddled with bullets as he drove home late at night.

In the 95th Congress at the hearings before the select committee on assassinations, it was suggested that Crisman was one of the three tramps at Dealy Plaza.

Maury Island.  Doesn’t everyone believe that the Maury Island Incident is a hoax?  Well, not everyone.  J Edgar Hoover didn’t believe it was a hoax.  In a teletype of August 14, 1947, Hoover stated, “It would also appear that Dahl and Crisman did not admit the hoax to the army officers…” and FBI special agent in charge from Seattle George Wilcox answered, “Please be advised that Dahl did not admit to Brown that his story was a hoax but only stated that if questioned by authorities he was going to say it was a hoax because he did not want any further trouble over the matter.”

Fred Crisman not only didn’t admit it was a hoax but in the January 1950 issue of Fate he called those accusations a “bald-faced lie.”  Ray Palmer didn’t believe it was hoax . Ray published the case in Fate, vol 1, no 1, 1948; The Coming of the Saucers, 1952; and in The Real UFO Invasion, 1967.  Kenneth Arnold didn’t believe it was a hoax.  At the First International UFO Congress in Chicago, Arnold discussed the Maury Island incident at length as if it were true.

Who does claim Maury Island is a hoax?  Edward J Ruppelt, one time head of the US Air Force project investigating flying saucers, identified it as a hoax.  Please keep in mind the Maury Island episode took place in the summer of 1947.  Ruppelt took charge of Project [Grudge] in 1951 and wrote The Report on Unidentified Flying Objects in 1956.  Time seems to have blurred his memory, and he admitted that this was “the era of confusion.”  Dr Edward Condon was convinced that it was a hoax.  In his Scientific Study of Unidentified Flying Objects that was neither scientific nor a study, he discusses the Maury Island case in 115 words and uses the “H” word three times.  Condon’s staff member William Hartmann agreed with Condon.  In his 155 word analysis he uses the “H” word four times.  And where did Condon and Hartmann get their information?

From Ruppelt.  And, oh yes, Jerome Clark agrees with Ruppelt and Condon.  So, if you want to side with the CC&R’s (Condon, Clark and Ruppelt) it’s your choice.