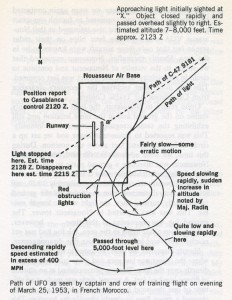 At approximately 9.35 pm, the control tower at Nouasseur informed the C-47 number 9181 that had observed the object earlier, that GCA radar had detected four objects on their screen and there were only three aircraft known to be in the area.  Shortly thereafter, Nouasseur tower requested that the C-47 number 9181 return to vicinity of where the unidentified object was last seen.  Upon returning to Nouasseur, the object (light) was still visible on the ground and still exhibiting the same irregular fluctuation in intensity.  This was reported to Nouasseur tower.  During this time the C-47 was advised that the Airdrome Officer at Nouasseur was directing a ground party to the vicinity.  The C-47 flew a circular pattern around where the object was and turned on their landing lights and even dropped a flare to help guide the ground party to the location of the light.  The C-47 circled the location for approximately 45 minutes at altitudes as low as 1,000 feet.  At around 10.15 pm, the light was no longer visible.  At 11.09 pm, Port Lyautey picked up an unidentified object between 5,000 and 9,000 feet over Casablanca, approximately fifteen miles north of Nouasseur Air Base, on their radar and believed that it is a jet aircraft.  CZ Flight Service said we do not have any jet aircraft flying in the area.  Possible nuclear connection.