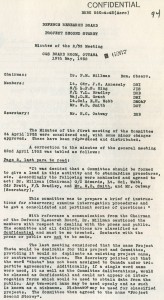 Minutes of the 2/52 Meeting

The Minutes of the first meeting of the Committee 24 April 1952 were considered and, with some minor changes approved.  These have been reproduced and distributed.

A correction to the minutes of the general meeting 22nd April 1952 was tabled as follows:

“It was decided that a Committee should be formed to give a lead in this activity and to standardise procedures, etc.  Accordingly the following were nominated and agreed to act: Dr. Millman (Chairman) G/C Edwards, Lt. Col. Webb, Cdr Pratt, F/L Bradley, and Mr. W.B. Smith, and Mr. Oatway (Secretary).

This committee was to prepare a brief of instructions for observers; examine interrogation procedures and to get a consolidated and pertinent series of questions: “

With reference a communication from the Chairman of the Defence Research Board, Dr. Millman cautioned the members with respect to dealing with the press and public.  The committee and all deliberations are classified as Confidential and must be so treated.  Contacts with the press or public are not to be made.

The last meeting considered that the name Project Theta would be desirable for this project and Committee, providing it would no[t] duplicate an existing project name, or contravene regulations.  The Secretary pointed out that the word “theta” has not been assigned to Canada under tripartite agreements.  Additionally, if a single word name were used, it as well as the Committee deliberations, would be classed as Confidential and could not appear on interrogation forms which would be used to obtain data from the public.  Any two-word name may be used openly and as such is known as a nickname.  Nicknames may be used for classified projects.  The Committee then agreed to the name “Project Second Storey”.