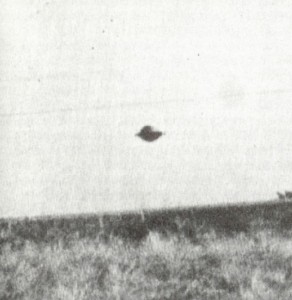 On the 12th of May, 1976 Mr Joshua da Silva and Mr Gesareo Goncalves were driving in Goncalves’s car from Iteri to Passo Fundo, Brazil.  At ten am, when they were less than 50 km (31 miles) from Passo Fundo, near the Jacui River, da Silva spotted a silver metallic spherical object resembling the planet Saturn, replete with ring.

Gesareo drove slowly toward it until they were abreast and it was approximately twenty meters (130 feet) distant.  They estimated the object, which had a “brushed metal” surface, to be six to eight meters (twenty to 26 feet) in diameter.

When abreast of the object, Goncalves stopped the car while da Silva turned and fumbled in a bag in the back seat for his Kodak Rio camera, which was loaded with color film.

When the car stopped, the object began to descend.  Da Silva snapped one photo, rolled the film and snapped another, whereupon the object began moving into the northeast, increasing its speed as it went, until it was out of sight.  It was gone in just seconds.

Technicians at El Globo, one of Rio’s newspapers, examined the negative and said they could find no evidence of a hoax.

It is interesting to note how closely the Janusas and da Silva photos resemble the Trindade photos of 1957.