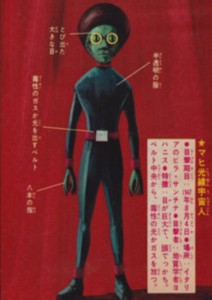 In August 1947 [Professor Johannis Luigi Rapuzzi], an Italian artist, was walking in the mountains between Italy and Yugoslavia.  Ahead of him he saw a glowing red saucer-shaped object approximately 30 feet wide attended by two dwarf-like entities.

[The entities were] less than one metre tall, wearing dark blue coveralls with red collars and belts.  They had oversized heads, greenish faces, huge, salient dark eyes without eyelashes or eyebrows, but surrounded by a ringlike muscle.  They wore something similar to crash helmets.  The center of their belts projected a “vapor,” and the witness suffocated, feeling a strong electrical discharge.  The creature had greenish hands with eight talonlike fingers.

Following this, the entities appear to have ignored him and left.