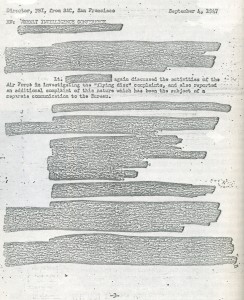 Lt. [blacked out] again discussed the activities of the Air Force in investigating the “flying disc” complaints, and also reported an additional complaint of this nature which has been the subject of a separate communication to the Bureau.

This memo is typical of the data revealed under Freedom of Information Act requests – showing the sea of censorship.  This particular memo dates from before the US Government were even officially investigating UFOs (ie four months before Project Sign began).  But it’s clear to set how little they are prepared to release even half a century later!