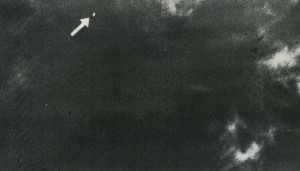 Frank Ryman, coastguard… took a photograph of a UFO flying over Seattle, Washington, in… 1947. 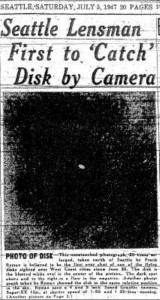 PHOTO OF DISK    This unretouched photograph, 20 times enlarged, taken north of Seattle by Frank Ryman is believed to be the first ever shot of one of the flying disks sighted over West Coast cities since June 26.  The disk is the blurred white oval in the center of the picture.  The dark spot above and to the right is a flaw in the negative.  Another photograph taken by Ryman showed the disk in the same relative position in the sky.  Ryman used a [?] and [?] inch Speed Graphic camera, Super-XX Film, at shutter speed of 1/50 and f 22-lens opening.  (Another picture on Page 3.) 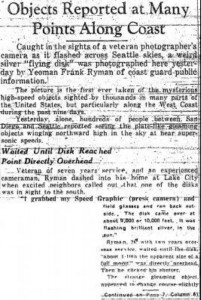 Objects Reported at Many

Caught in the sights of a veteran photographer’s camera as it flashed across Seattle skies, a weird silver “flying disk” was photographed here yesterday by Yeoman Frank Ryman of coast guard public information.

The picture is the first ever taken of the mysterious high-speed objects sighted by thousands in many parts of the United States, but particularly along the West Coast during the past nine days.

Yesterday, alone, hundreds of people between San Diego and Seattle reported seeing the plate-like gleaming objects winging northward high in the sky at near supersonic speeds.

Veteran of seven years service, and an experienced cameraman, Ryman dashed into his home at Lake City when excited neighbors called out that one of the disks was in sight to the south.

“I grabbed my Speed Graphic (press camera) and field glasses and ran back outside.  The disk came over at about 9,000 or 10,000 feet.  It was flashing brilliant silver, in the sun.”

Ryman, 26, with two years overseas service, waited until the disk, “about 1-10th the apparent size of a full moon,” was directly overhead.  Then he clicked his shutter.

“There was no noise,” he said.  “No sound of engines.  And I am positive there were no wings or fins in sight.  It definitely was not a plane.  I looked for wings and other possible projections as I watched it through the binoculars.”

To confirm his own judgment after the disk had vanished into the blue to the north, Ryman phoned the navy weather station.

“I though that perhaps it conceivably could have been a weather balloon being blown along by a high wind.  The navy told me that there was very little wind – about 10/12 knots at most.  The object I photographed appeared to be traveling over 500 miles an hour.”

Convinced it was no balloon, Ryman phoned the Post-Intelligencer to report the appearance of the disk and his picture-taking attempt.

A hurried trip to the P. I.’s darkroom proved his skill with his camera.

Right in the middle of the exposed plate was the disk.

Enlarged many times the disk showed up clearly as a slightly blurred whitish object.

“Through field glasses the disk appeared to be extremely smooth on its surface.  There were no apertures or ports or vents visible,” Ryman said.