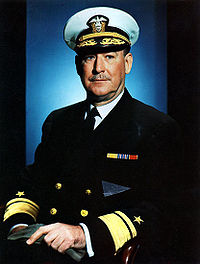 An American admiral and intelligence expert.  He held the posts of:

Rear Admiral Souers was appointed as the first Director of Central Intelligence on January 23, 1946 by President Harry S. Truman.  Prior to this, as Deputy Director of Naval Intelligence, Souers had been one of the architects of the system that came into being with the President’s directive.  He had written the intelligence chapter of the Eberstadt Report, which advocated a unified intelligence system.  Toward the end of 1945, when the competing plans for a national intelligence system were deadlocked, Souers’s views had come to the attention of the President, and he seems to have played a role in breaking the impasse.