From Walter B Smith to the NSC Executive Secretary 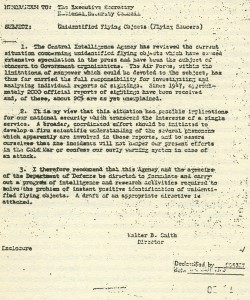 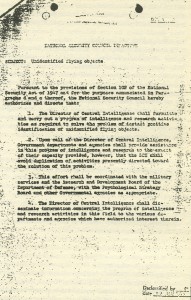 1.     The Central Intelligence Agency has reviewed the current situation concerning unidentified flying objects which have caused extensive speculation in the press and have been the subject of concern to government organisations.  The Air Force, within the limitations of manpower which could be devoted to the subject, has thus far carried the full responsibility for investigating and analyzing individual reports of sightings.  Since 1947, approximately 2000 official reports of sightings have been received and, of these, about 20% are as yet unexplained.

2.     It is my view that this situation has possible implications for our national security which transcend the interests of a single service.  A broader, coordinated effort should be initiated to develop a firm scientific understanding of the several phenomena which apparently are involved in these reports, and to assure ourselves that the incidents will not hamper our present efforts in the Cold War or [endanger?] our early warning system in case of an attack.

3.     I therefore recommend that this agency and the agencies of the Department of Defense be directed to formulate and carry out a program of intelligence and research activities required to solve the problem of instant positive identification of unidentified flying objects.  A draft of an appropriate directive is attached.

1.     The Director of Central Intelligence shall formulate and carry out a program of intelligence and research activities as required to solve the problem of instant positive identification of unidentified flying objects.

2.     Upon call of the Director of Central Intelligence, Government departments and agencies shall provide assistance in this program of intelligence and research to the extent of their capacity provided, however, that the DCI shall avoid duplication of activities presently directed toward the solution of this problem.

3.     This effort shall be co-ordinated with the military services and the Research and Development Board of the Department of Defense, with the Psychological Strategy Board and other Governmental agencies as appropriate.

4.     The Director of Central Intelligence shall disseminate information concerning the program of intelligence and research activities in this field to the various departments and agencies which have authorized interest therein.”

On 24 September [1952], the Assistant Director for Scientific Intelligence, Dr H Marshall Chadwell, based a memo on this paper to the CIA’s Director, General Walter Bedell Smith.  He wondered if UFO sightings could be controlled, predicted or used in psychological warfare by the Soviets (given that “a fair proportion of our population is mentally conditioned to the acceptance of the incredible”).  In short, belief in flying saucers might be manipulated to create a flap, which could confuse the US air warning system and camouflage a surprise Soviet attack.  Chadwell ended:

“I consider this problem to be of such importance that it should be brought to the attention of the National Security Council in order that a community-wide effort towards its solution may be initiated.”