Between Wilbert B Smith and Dr Robert I Sarbacher 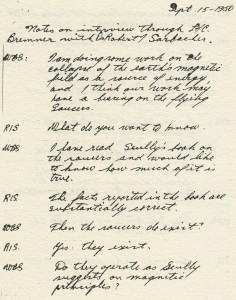 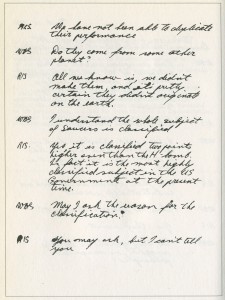 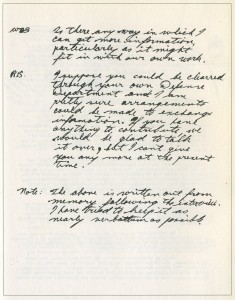 Notes on interview through Lt/C. [Lieutenant Colonel] Bremner with Dr Robert I Sarbacher.

WBS:   I am doing some work on the collapse of the earth’s magnetic field as a source of energy, and I think our work may have a bearing on the flying saucers.

WBS:   I have read Scully’s book on the saucers and would like to know how much of it is true.

RIS:      The facts reported in the book are substantially correct.

WBS:   Then the saucers do exist?

WBS:   Do they operate as Scully suggests, on magnetic principles?

RIS:      We have not been able to duplicate their performance

WBS:   Do they come from some other planet?

RIS:      All we know is, we didn’t make them, and it’s pretty certain they didn’t originate on the earth.

WBS:   I understand the whole subject of saucers is classified

RIS:      Yes, it is classified two points higher even than the H-bomb.  In fact it is the most highly classified subject in the US Government at the present time.

WBS:   May I ask the reason for the classification.

WBS:   Is there any way in which I can get more information, particularly as it might fit in with our own work.

RIS:      I suppose you could be cleared through your own Defense Department and I am pretty sure arrangements could be made to exchange information.  If you have anything to contribute, we would be glad to talk it over, but i can’t give you any more at the present time.

Note: The above is written out from memory following the interview.  I have tried to keep it as nearly verbatim as possible.