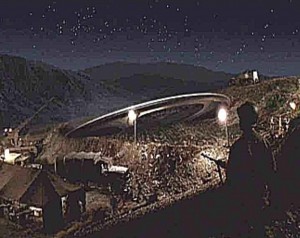 There were pictures of a 100-foot disk that had crashed in Timmendorfer, Germany, near the Baltic Sea in 1961.  The British Army, according to the report, got there first and put up a perimeter.  The craft had landed in very soft, loamy soil near the [East German] border and so hadn’t destructed, but one-third of it was buried.  The US and the Russians, who also quickly showed up, had both tracked it.  Inside there were twelve small bodies, all dead and ranged in size from three feet to four feet tall.  All were compliant with the short grey traditional imagery – immense eyes, large heads, thin bodies.  There were pictures of the bodies being laid out and then put on stretchers and loaded into jeeps, and autopsy photos too.  Some of the little greys appeared to not be a reproduction-capable species.

The autopsy guys concluded, according to the report, that it looked as if they had been cut out of a cookie cutter, clones with no alimentary tract.  They did not ingest or process food as we know it, nor did it appear that they had any system for elimination.  The craft itself was cut up like a pie into six pieces, put on lowboys and hauled off.  Scuttlebutt was that it was given to the Americans and flown to Wright-Patterson Air Force base in Ohio.