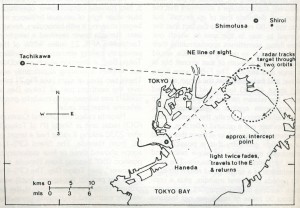 On August 5, 1952, just before midnight, two Air Force control tower operators at the Haneda US Air Force Base near Tokyo, Japan, noticed a brilliant light in the sky, joined others and watched it through 7×50 binoculars.

The UFO approached the base slowly and hovered, plainly visible from the control tower.  Behind the brilliant light, the observers could see a dark circular shape four times the light’s diameter.  A similar body light was visible on the underside at one point.  The UFO hovered, flew curves and performed a variety of maneuvers.

The tower contacted Ground Control Intercept, who picked up its track on radar.

The UFO was given chase by the F-94, tracked on ground radar also, and went into a series of circular maneuvers, repeated several times.  At one point, the UFO suddenly raced away at a clocked speed of 300 knots (about 345 mph), dividing into three separate radar targets at spaced intervals.  Contact with the UFO, either by radar or visually from Haneda AFB, was maintained for over 30 minutes.  During this period, scattered witnesses saw the UFO exactly where radar showed it to be.

GCI contacted a transport plane, a C54 in the vicinity, and vectored it in towards the saucers but it could not catch them with its much lower speed.  The objects were not seen after this.

Project Blue Book, the official public UFO study by the US Air Force concluded that the UFO belongs to the category “unknown”, the euphemism that meant that it could not be anything common.

The UFO maneuvers were so clearly under intelligent control that Major Dewey Fournet, the representative of Project Blue Book at the Pentagon, elected it one of the example that would prove that UFOs are spaceships from some other planet.  Subsequently the study of UFO maneuvers to prove they are spaceships was simply dropped.

Later, the Colorado Project, a skeptical UFO study effort conducted for the USAF that did not want to deal with the UFO problem anymore, minimized the details of the sighting.  The visual UFO was reduced to “a light that looked like a star” and the radar track which was obviously the track of an intelligent controlled craft was reduced to “false radar echoes caused by a temperature inversion layer.”

Professor James McDonald, a world famous specialist of meteorology and atmospheric physics, who disagreed with the handling of UFO cases by the Condon Report, re-evaluated and re-investigated the case and demonstrated how erroneous the Condon Report conclusion on this case – and on many other cases – was.

I do not like the idea of a case summary at all here: every little detail of the case is important.  Actually, it is by forgetting and minimizing case details that this case has been turned into an “explained” case by the Colorado Project which lead to the Condon Report.