Newhouse – The exact date of my sighting was July second, nineteen fifty-two, at eleven A. M., Mountain Standard Time.  I was driving on U.S. Highway thirty-south, with my wife and son, Delbert, and our daughter, Anne.  We were on our way from Washington D. C., to Portland, Oregon – on vacation – before… my new duty station at the Aviation Supply…

The exact date of the sighting was July second at eleven am Mountain Standard Time.

I was driving on US Highway 30 south, with my wife and our son, Delbert, and our daughter, Anne.  We were on our way from Washington DC to Portland, Oregon on vacation before reporting to my new duty station at the Aviation Supply Depot, Naval Supplies Center, Oakland, California.  About seven miles after we passed through Tremonton, Utah, my wife noticed a group of objects in the sky which she could not identify.  I pulled over to the side of the road, stopped, got out, looked up and saw the objects.  There were about twelve of them in a rough formation, proceeding in a westerly direction.

They were like nothing I’d ever seen before, although I’ve logged some 2,000 hours in the air.  They were identical in appearance.

How would you describe these objects?

Like two saucers, one inverted over the other.  I had no means of judging the altitude.  It appeared to me to be about the size of B-29s at 10,000 feet.

Did you photograph them immediately?

I watched the objects for a few moments before getting my camera out of the suitcase, then I lost more time getting film out of the second suitcase and loading the camera.  When I first saw the objects they were almost overhead.  By the time I had the camera ready to go they had moved to a considerably greater distance.

What kind of a camera did you use?

A 16mm Bell and Howell Filmo Autoload Master with the three-lens turret.  I selected a three-inch lens and set it on f/8 and focussed on infinity.

Did you think of using slow motion?

No.  The camera was set on sixteen frames per second and in the excitement of the moment I didn’t think to shoot at a greater rate, although that would have improved the coverage.  I centered the viewfinder on the objects and made the first shot.  Then I decided if the sky were darker the objects would show better, so I stopped the lens down to f/16 and continued photographing.  This proved to be a mistake as the quality of the film would have been better had I left it at f/8.

Did these objects remain together in a group at all times?

No.  Toward the end one object reversed its course and proceeded away from the rest of the group.  I held the camera still and allowed this single object to pass through the field of view, picking it up again later in its course.

Did this single object return to the rest of the group?

No. I allowed it to pass through the field of view of the camera two or three times and then it disappeared.

Over the eastern horizon.

What did you do then?

I turned, swinging the camera, just in time to see the rest of the group disappear over the western horizon.

What was the weather?

The weather was bright and cloudless.

The visibility was excellent.

How does this film you shot compare with what you saw with your naked eye?  You have studied the film?

Yes, I’ve studied it.  I’m very disappointed.  The film falls far short of showing what I saw with the naked eye due to the delay in getting the camera started and my error in exposure.  If I’d had this camera in the seat beside me, loaded and ready to go, there’d be no need for questions.  The Air Force would have the answer.

What is your full name, please?

And you are on active duty with the Navy?

What is your official Navy rank?

How long have you been in the service?

Now, is there anything you can add to the description of these objects?

They had a bright, silvery colour.

Can you describe some particular detail?

They had a metallic appearance.  They seemed to be made of some kind of polished metal.

The UTAH film (7 to 16 objects) has been studied by the Photo Reconnaissance Laboratory, Wright-Patterson Air Force Base, and by the U. S. Navy Photo Interpretation Center, Washington, D. C.  The following observations have been made:

1.    The objects appear to be a light source rather than reflected light.

2.    All the objects appear to be the same size and circular in shape.

3.    The general color of the objects seems to be bluish-white.

4.    If the distance is assumed to be five miles and the movement perpendicular to the line of sight the average velocity noted is 635.5 mph; likewise, at 2½ miles distance the average speed is 326.75 mph.

5.    Generally the movement in flight appears to follow an elliptical or circular pattern, within the group.

While the objects remain unidentified the following possibilities have been eliminated:

These films have never before been shown to the general press and public.

This is the Utah film as it was originally photographed.  The image structure and manoeuvres definitely eliminate any kind of known aircraft.

This is where Chief Photographer Newhouse, in his excitement, changed exposure.  He believed that by changing density and giving the film more contrast, he could clarify the objects.

The single object that reversed its course.  The bounce is due to handheld camera.

Now we study the action of one section of the film.  We stop the action; we move in.

Within a five-mile range aircraft could be determined.  In excess of five miles the speeds are greater than aircraft can achieve except in straight-line speed runs.  The movement here follows an elliptical or circular pattern.  Microscopic examination reveals that the objects are well focussed.  Their size varies from one-sixth to one-tenth the size of the moon as it appears to the naked eye.  Their form is circular and sometimes elliptical.  This fits the commonly used “flying saucer” description.

Observe the object in the upper-left corner.  We move in to study the action.  The object upper-left will go out of frame on widescreen projection.

Observe the motion of the two objects upper-right as we rock them back and forth.  Now we move over and up on the frame to make a closer study of the object in the upper-left corner.  Examine this object closely.  Compare it with those objects you saw in the Montana film.  These films were taken approximately two years apart, hundreds of miles apart.

We drop back to the original perspective and resume.  Now the section of the film where photographer Newhouse changed exposure.  Weather conditions, together with the persistence and motion of the formations, eliminate the possibility of atmospheric mirages.  Photogrammetric experiments have shown that the images cannot be associated with any kind of birds at any distance.

Stop.  Now forward again.  Stop.  We drop back to original perspective.  Now, once again and for the last time, the Utah film.  The objects cannot be associated with any known balloon observations. 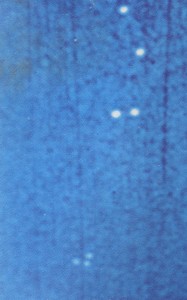 On 2 July 1952, US Navy warrant officer Delbert C Newhouse, with his wife and two children, was driving north on Highway 30, about eleven km north of Tremonton (Utah)…  His wife drew his attention to a group of ten or twelve bright objects “off towards the eastern horizon”, in an otherwise absolutely clear blue sky.  When he found that he could not identify the objects (they bore no relation to anything he had seen before), Newhouse stopped the car and reached for the 16mm cine camera (with 75mm telephoto lens) he had in the car.  He was an experienced Navy photographer.  He loaded the camera and exposed about nine metres of film, aimed at the objects.  Newhouse claimed that the objects… all had the same motion (“milling around in the sky”), except one which reversed course.  Mostly he filmed facing north, but it is reported that the objects vanished to the west.  Stills from the film show several pairs of white blobs, two pairs in the one exhibited here…

Newhouse… saw twelve “gun-metal colored” objects, each “like two pie cans, one inverted on top of the other” flying west in changing formation.  [The UFOs] seemed huge and very high, but Newhouse could not accurately guess their size, speed, distance or altitude.  He did say “If they had been the size of B-29s they would have been at 10,000 feet (3,000 metres) altitude”…

Newhouse… had over 2,000 flying hours and stated that he had never seen anything resembling the “twelve saucer-shaped discs”.  Their color and appearance was “silvery and metallic looking, like they were made of bright, polished metal”.  He stated that their pattern of flight was somewhat circular….

Newhouse also said that the objects did not remain in formation at all times, with one object breaking off entirely and going off somewhere in the distance; in addition the objects made no sound nor had any visible wake or exhaust.  The weather was clear and sunny with excellent visibility.

Newhouse stated that he was disappointed in the film compared to what he actually saw with his eyes…  Newhouse also stated that before, during, or after no planes, balloons, or birds appeared in the sky while he was there.

Blue Book interviewed Newhouse several times and worked on the film for several months.  The USAF photography lab at Wright-Patterson AFB could not identify the objects on the film but thought they were not “airplanes or balloons, and we don’t think they are birds.”

The USAF then passed the footage to the US Navy Photographic Interpretation Laboratory (PIL), who spent about 1,000 man-hours analyzing it frame by frame.  They too failed to identify the objects, but believed they were internally lighted, not reflections, “because there was no blinking while passing through 60 degrees of arc”.  They calculated that if the UFOs were ten miles (sixteen km) from the camera, their speed would be 7,560 mph (12,000 km/h); if 2½ miles (four km) away, their speed would be 1,890 mph (3,000 km/h).

The film has been subject to intensive investigation, especially by the USAF and the US Navy on behalf of Blue Book.  Neither could identify the objects, but the USAF was certain that they were not aircraft, balloons or birds.  The Navy claimed that the objects were internally lit spheres (not objects reflecting sunlight).

The still-famous Tremonton movie, on which… the US Navy photo interpretation laboratory had lavished 1,000 man-hours, was given short shrift. The [Robertson Panel] scientists raised no less than eleven objections to the Navy analysts’ conclusion that the objects depicted were large, “self-luminous and fast-moving…

The panel decided the objects were most likely to be birds.

On the three days I sat in on the series of meetings I was negatively impressed by the relatively few cases examined by the [Robertson] panel.  Several now classic UFO reports were discussed: the famous Tremonton, Utah, and Great Falls, Montana, films were reviewed and summarily dismissed as “seagulls” and “jet aircraft” respectively.

Baker, who made an independent study in 1955, asked why a naval officer would take the trouble to film birds. (Sagan and Page 1972) Menzel remained convinced that the objects were birds… (Menzel and Boyd 1963)

After having re-examined the film for the Condon study, and watching some flocks of birds at Tremonton, William K Hartmann concurred, remarking: “There is no conclusive or probative evidence that the case involves extraordinary aircraft.”

The Condon Report gives full details, including the photographic data…

After making a computer-assisted analysis in 1976… Ground Saucer Watch concluded the objects were disks that were about 50 feet (fifteen metres) across, and five to seven miles (eight to eleven km) distant. 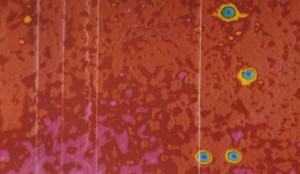 Menzel… even claimed that [it] had been “proved conclusively” [that the UFOs were birds]. (Menzel and Taves 1977)