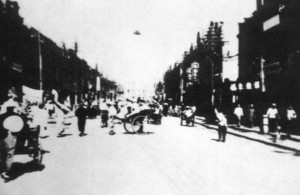 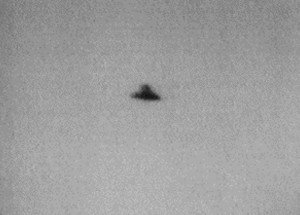 Chinese ufologist Shi Bo, La Chine et les Extraterrestres (in French, since Shi Bo lives in Paris)… states in his book (my translation): “In 1942, an American man on duty was walking in the street of a town {not specified} in the north of China.  He suddenly saw a black hat silently flying above the street.  He immediately grabbed his camera and took this first picture of a UFO in China.  This American citizen wished to visit China very soon in order to trace the witnesses of this event.”  (This commentary was written in 1982 – the book was published in January 1983.)  Additional information comes from Wendelle Stevens’s UFOs over Modern China UFO photo archives.  Young Japanese student Masujiro Kiryu, going through his father’s scrapbook of photographs fron the China Campaign, just before World War II, discovered a strange cone-shaped object in the sky above a Tsientsien Street.  A number of people in the street are looking up and two are pointing up at the object.  A sidewalk photographer snappped a picutre of the strange machine and his father bought it from the street vendor for a souvenir of the place.

[Neither Tiensten nor Tsientsien can be found in Google Maps.  Map pointer indicates Hebei Province.]