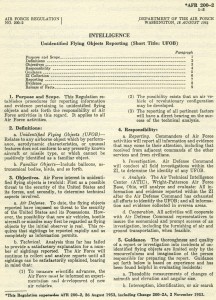 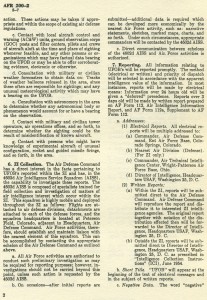 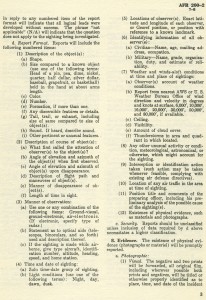 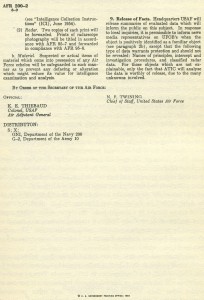 DEPARTMENT OF THE AIR FORCE

1. Purpose and Scope. This Regulation establishes procedures for reporting information and evidence pertaining to unidentified flying objects and sets forth the responsibility of Air Force activities in this regard. It applies to all Air Force activities.

a. Unidentified Flying Objects (UFOB) – Relates to any airborne object which by performance, aerodynamic characteristics, or unusual features does not conform to any presently known aircraft or missile type, or which cannot be positively identified as a familiar object.

b. Familiar Objects – Include balloons, astronomical bodies, birds, and so forth.

3. Objectives. Air Force interest in unidentified flying objects is twofold: First as a possible threat to the security of the United States and its forces, and secondly, to determine technical aspects involved.

a. Air Defense. To date, the flying objects reported have imposed no threat to the security of the United States and its Possessions. However, the possibility that new air vehicles, hostile aircraft or missiles may first be regarded as flying objects by the initial observer is real. This requires that sightings be reported rapidly and as completely as information permits.

b. Technical. Analysis thus far has failed to provide a satisfactory explanation for a number of sightings reported. The Air Force will continue to collect and analyze reports until all sightings can be satisfactorily explained, bearing in mind that:

(1) To measure scientific advances, the Air Force must be informed on experimentation and development of new air vehicles

(2) The possibility exists that an air vehicle of revolutionary configuration may be developed.

(3) The reporting of all pertinent factors will have a direct bearing on the success of the technical analysis.

a. Reporting. Commanders of Air Force activities will report all information and evidence that may come to their attention, including that received from adjacent commands of the other services and from civilians.

b. Investigation. Air Defense Command will conduct all field investigations within the ZI, to determine the identity of any UFOB.

d. Cooperation. All activities will cooperate with Air Defense Command representatives to insure the economical and prompt success of an investigation, including the furnishing of air and ground transportation, when feasible.

5. Guidance. The thoroughness and quality of a report or investigation into incidents of unidentified flying objects are limited only by the resourcefulness and imagination of the person responsible for preparing the report. Guidance set forth below is based on experience and has been found helpful in evaluating incidents:

a. Theodolite measurements of changes of azimuth and elevation and angular size.

b. Interception, identification, or air search

action. These actions may be taken if appropriate and within the scope of existing air defense regulations.

c. Contact with local aircraft control and warning (AC&W {see ACW}) units, ground observation corps (GOC) posts and filter centers, pilots and crews of aircraft aloft at the time and place of sighting whenever feasible, and any other persons or organisations which may have factual data bearing on the UFOB or may be able to offer corroborating evidence, electronic or otherwise.

d. Consultation with military or civilian weather forecasters to obtain data on: Tracks of weather balloons released in the area, since these often are responsible for sightings; and any unusual meteorological activity which may have a bearing on the UFOB.

e. Consultation with astronomers in the area to determine whether any astronomical body or phenomenon would account for or have a bearing on the observation.

f. Contact with military and civilian tower operators, air operations offices, and so forth, to determine whether the sighting could be the result of misidentification of known aircraft.

g. Contact with persons who might have knowledge of experimental aircraft of unusual configuration, rocket and guided missile firings, and so forth, in the area.

6. ZI Collection. The Air Defense Command has a direct interest in the facts pertaining to UFOB’s reported within the ZI and has, in the 4602d Air Intelligence Service Squadron (AISS), the capability to investigate these reports. The 4602d AISS is composed of specialists trained for field collection and investigation of matters of air intelligence interest which occur within the ZI. This squadron is highly mobile and deployed throughout the ZI as follows: Flights are attached to air defense divisions, detachments are attached to each of the defense forces, and the squadron headquarters is located at Peterson Field, Colorado, adjacent to Headquarters, Air Defense Command. Air Force activities, therefore, should establish and maintain liaison with the nearest element of this squadron. This can be accomplished by contacting the appropriate echelon of the Air Defense Command as outlined above.

a. All Air Force activities are authorized to conduct such preliminary investigation as may be required for reporting purposes; however, investigations should not be carried beyond this point, unless such action is requested by the 4602d AISS.

b. On occasions – after initial reports are submitted – additional data is required which can be developed more economically by the nearest Air Force activity, such as: narrative statements, sketches, marked maps, charts, and so forth. Under such circumstances, appropriate commanders will be contacted by the 6402d AISS.

c. Direct communication between echelons of the 4602d AISS and Air Force activities is authorised.

7. Reporting. All information relating to UFOB’s will be reported promptly. The method (electrical or written) and priority of dispatch will be selected in accordance with the apparent intelligence value of the information. In most instances, reports will be made by electrical means: Information given over 24 hours old will be given a “deferred” precedence. Reports over 3 days old will be made by written report prepared on AF Form 112, Air Intelligence Information Report, and AF Form 112a, Supplement to AF Form 112.

(1) Electrical Reports. All electrical reports will be multiple addressed to:

(b) Nearest Air Division (Defense). (For ZI only.)

(a) Within the ZI, reports will be submitted direct to the Air Defense Command. Air Defense Command will reproduce the report and distribute it to interested ZI intelligence agencies. The original report together with notation of the distribution effected then will be forwarded to the Director of Intelligence, Headquarters USAF, Washington 25, D. C.

(b) Outside the ZI, reports will be submitted direct to Director of Intelligence, Headquarters USAF, Washington 25, D. C. as prescribed in “Intelligence Collection Instructions (ICI), June 1954.

b. Short Title. “UFOB” will appear at the beginning of the text of electrical messages and in the subject of written reports.

in reply to any numbered item of the report format will indicate that all logical leads were developed without success. The phrase “not applicable” (N/A) will indicate that the question does not apply to the sighting being investigated.

d. Report Format. Reports will include the following numbered items:

(b) Size compared to a known object (use one of the following terms: Head of a pin, pea, dime, nickel, quarter, half dollar, silver dollar, baseball, grapefruit, or basketball) held in the hand at about arms length.

(e) Formation, if more than one.

(f) Any discernible features or details.

(g) Tail, trail, or exhaust, including size of same compared to size of object(s).

(i) Other pertinent or unusual features.

(2) Description of course of object(s):

(a) What first called the attention of observer(s) to the object(s)?

(b) Angle of elevation and azimuth of the object(s) when first observed.

(c) Angle of elevation and azimuth of object(s) upon disappearance.

(d) Description of flight path and maneuvers of object(s).

(e) Manner of disappearance of object(s).

(f) Length of time in sight.

(a) Use one or any combination of the following items: Ground-visual, ground-electronic, air-electronic. (If electronic, specify type of radar.)

(b) Statement as to optical aids (telescopes, binoculars, and so forth) used and description thereof.

(c) If the sighting is made while airborne, give type aircraft, identification number, altitude, heading, speed, and home station.

(4) Time and date of sighting:

(a) Zulu time-date group of sighting.

(b) Light conditions (use one of the following terms): Night, day, dawn, dusk.

(5) Location of observer(s). Exact latitude and longitude of each observer, or Georef position, or position with reference to a known landmark.

(6) Identifying information of all observer(s):

(b) Military – Name, grade, organisation, duty, and estimate of reliability.

(7) Weather and winds-aloft conditions at time and place of sightings:

(f) Thunderstorm in area and quadrant in which located.

(9) Interception or identification action taken (such action may be taken whenever feasible, complying with existing air defense directives).

(10) Location of any air traffic in the area at time of sighting.

(11) Position title and comments of the preparing officer, including his preliminary analysis of the possible cause of the sighting(s).

(12) Existence of physical evidence, such as materials and photographs.

e. Security. Reports should be unclassified unless inclusion of data required by d above necessitates a higher classification.

8. Evidence. The existence of physical evidence (photographic or material) will be promptly reported.

(1) Visual. The negative and two prints will be forwarded, all original film, including wherever possible both prints and negatives, will be titled or otherwise properly identified as to place, time and date of the incident

b. Materiel. Suspected or actual items of materiel which come into possession of any Air Force echelon will be safeguarded in such manner as to prevent any defacing or alteration which might reduce its value for intelligence examination and analysis.

9. Release of Facts. Headquarters USAF will release summaries of evaluated data which will inform the public on this subject. In response to local inquiries, it is permissible to inform news media representatives on UFOB’s when the object is positively identified as a familiar object (see paragraph 2b), except that the following type of data warrants protection and should not be revealed: Names of principles, intercept and investigation procedures, and classified radar data. For those objects which are not explainable, only the fact that ATIC will analyze the data is {worthy} of release, due to the many unknowns involved.

ONI, Department of the Navy 200