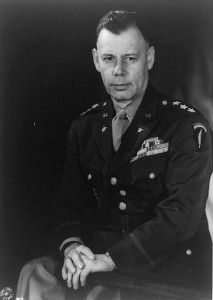 The death of Secretary Forrestal on 22 May, 1949, created a vacancy [in the Majestic-12 Group] which remained unfilled until 1 August, 1950, upon which date General Walter Bedell Smith was designated as permanent replacement.

As far back as 1952, the then Director of Central Intelligence, Walter Bedell Smith, recognized the need for a multidisciplinary approach to the subject.  “It is my view that this situation has possible implications for our national security which transcend the interests of a single service,” he wrote in a memorandum to the Executive Secretary of the National Security Council.  “A broader, coordinated effort should be initiated to develop a firm scientific understanding of the several phenomena which apparently are involved in these reports…”