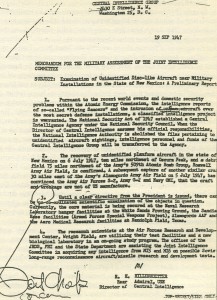 MEMORANDUM FOR THE MILITARY ASSESSMENT OF THE JOINT INTELLIGENCE COMMITTEE

SUBJECT: Examination of Unidentified Disc-like Aircraft near Military Installations in the State of New Mexico: A Preliminary Report

2.    The recovery of unidentified planform aircraft in the state of New Mexico on 6 July 1947, ten miles northwest of Oscura Peak, and a debri field 75 miles northwest of the Army’s 509th Atomic Bomb Group, Roswell Army Air Field, is confirmed.  A subsequent capture of another similar craft 30 miles east of the Army’s Alamogordo Army Air Field on 5 July 1947, has convinced the Army Air Forces S-2, Army G-2 and Navy ONI, that the craft and wreckage are not of US manufacture.

3.    Until a clear directive from the President is issued, there can be no co-ordinated scientific examination of the objects in question.  Currently, the core material is being secured at the Naval Research Laboratory hanger facilities at the White Sands Proving Ground, the Sandia Base facilities (Armed Forces Special Weapons Project), Alamogordo AAF and the Aero Medical Research facilities at Randolph Field, Texas.

4.    The research scientists at the Air Forces Research and Development Center, Wright Field, are utilising their test facilities and a new biological laboratory in an on-going study program.  The officers of the JRDB, FBI and the State Department are assisting the Joint Intelligence Committee in acquiring any intelligence from MI5 and MI6 on possible Soviet long-range reconnaissance aircraft/missile research and development tests.