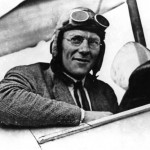 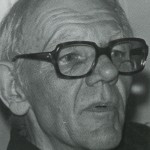 1922c – 1998.05.24 Head of the Defence Secretariat 8 (DS8), a division in the central staffs of the Ministry of Defence which dealt with UFO reports from members of the public. (Above Top Secret, Timothy Good) Noyes went on to become a UFO investigator. 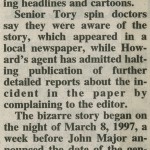 1997.03.08 [Click images to clarify and enlarge]     03.00 Tories hid Howard’s ‘alien visitation’ by Sebastian Hamilton Westminster Correspondent So there really was something of the night about Michael Howard.  The former home secretary was visited by extraterrestrial beings in the run-up to the last election, according to UFO-watchers near his home in Kent. In […]

1996.12 Elsewhere in the 6,000 pages of files released [by the MOD] are accounts of an encounter between a UFO and an airliner near Glasgow Airport in December 1996. White and red flashing lights were seen by pilots of an aircraft, at the same level [as in the Manchester airport incident] – roughly 7,500 feet. […]

1995.01.06 British Airways 737 approaching Manchester’s Ringway airport was buzzed by a fast-moving UFO, which hurtled directly towards them before veering off downside of the aircraft.  The pilot instinctively dived before calling Air Traffic Control, who told Captain Roger Wills and First Officer Mark Stuart that there were no other aircraft in the area. (Fact […]

1993.08 Europeans seem to be having more success [than Americans] in the UFO political arena.  The European Community’s Committee on Energy, Research and Technology (CERT) has recently commissioned Professor Tullio Regge, an Italian Deputy to the European Parliament in Strasbourg, to prepare a detailed report on UFOs.  This report will recommend whether or not to […]

1993.07c SAS in alien riddle Troops saw “four little grey men” walk into ambush – then vanish By Joe Brady SAS soldiers waiting to ambush IRA gunmen were stunned when aliens walked in front of their gun-sights, it was claimed yesterday. The undercover troops – hiding near an arms cache on a hillside in south […]

1993.03.31 01.05 Numerous witnesses from western and south Wales and western England reported that between 1.05 and 1.10 am on 31 March, against a clear sky, they saw two brilliant globular objects traveling at speed in a northwest-to-southeasterly direction.  The UFOs left long vapor trails and made no sound.  Estimates of height varied from 2,000 […]