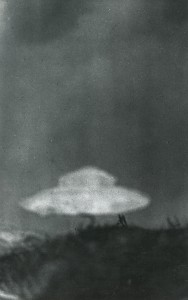 Flying saucer snapped by the then fourteen-year-old Stephen Darbishire at 11 am on 15 February 1954.  At the time he was walking with his eight-year-old cousin Adrian Myers, on the slopes of Coniston Old Man in the Lake District, England.

[Darbishire] was with his younger cousin taking photographs when an “Adamski” craft reportedly appeared.  Stephen took two shots of the object as it climbed skywards but wrongly set his camera.  The fuzzy image shows a remarkable close-up of a craft with typical Adamski features… 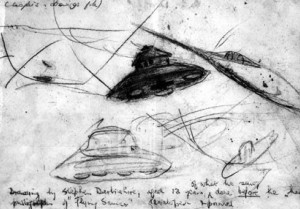 Drawing by Stephen Darbishire, aged 13 years, of what he saw, done before he had the photographs of “Flying Saucer” developed & printed

At the age of thirteen, Stephen Darbishire drew these pictures of a UFO he had seen and photographed just half an hour earlier.

There have been plenty of reliable sightings of near-identical craft.  These are typical “saucers” with three ball-like spheres set into the flat base of a bell-shaped dome.

Leonard Cramp, an aeronautical engineer, used a system called orthographic projection to prove that the objects depicted in Darbishire’s and Adamski’s photographs were proportionally identical.  In a [1991] interview with Darbishire, now a professional artist, he confirmed to Peter Hough and Dr Harry Hudson all the details of his original story.

Stephen Darbishire recently told UFO investigator Harry Hudson that prior to the incident he had never read Adamski‘s story and that he was interviewed by British intelligence after the sighting.  This team included figures who wore dark glasses.  Britain’s defence secretary later questioned him.