From Robert Cutler to Nathan Twining 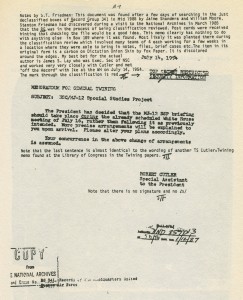 Notes by S.T. Friedman: This document was found after a few days of searching in the just declassified boxes of Record Group 341 in Mid 1985 by Jaime Shandera and William Moore.  Stanton Friedman has discovered during a visit to the National Archives in March 1985 that the RG was in the process of being classification reviewed.  Post cards were received hinting that checking the file would be a good idea.  This memo clearly has nothing to do with the classification review which involved many teams of 4 each working for a few weeks in a location where they were able to bring in notes, files, brief cases etc.  The item in its original form is a carbon on Dictation Onion Skin by Fox Paper.  It is discolored around the edges.  My best bet for the actual author is James S. Lay who was Exec. Sec of NSC and worked very very closely with Cutler and met “off the Record” with Ike at the WH on July 14, 1954.  The mark through the classification is red

The President has decided that the MJ-12 SSP briefing should take place during the already scheduled White House meeting of July 16, rather than following it as previously intended.  More precise arrangements will be explained to you upon arrival. Please alter your plans accordingly.

Your concurrence in the above change of arrangements is assumed.

Note that the last sentence is almost identical to the wording of another TS Cutler-Twining memo found at the Library of Congress in the Twining papers.

Note that there is no signature and no /s/

(Crash at Corona: The Definitive Story of The Roswell Incident, Berliner and Friedman)

CBS NEWS WITH DAN RATHER

The result of [the USAF’s] investigations into more than 12,000 sightings is in the National Archives.  One of the documents you can find there is the so-called Majestic-12 document, a 1954 White House memo summoning the Chairman of the Joint Chiefs of Staff to an extraordinary meeting of the National Security Council about UFOs.  To UFO buffs it’s a smoking gun, proof that the government has known all along UFOs were real…”