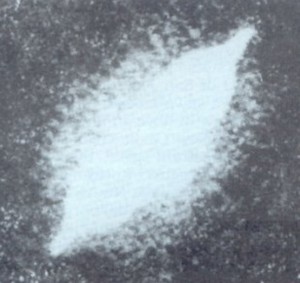 […] caught the attention of Michael Bennett, a young farmer at Elsthorpe (New Zealand) some time between 23.45 and 24.45 on 14 January 1969.  In fact his attention was drawn to it because it was moving about erratically.  “The object, which was a point of light but brighter than a star, appeared to be making random patterns; shifting its position, stopping for five or ten seconds, then moving into another spot…  Its glow could be seen behind scattered cloud.”  Bennett, a former professional photographer, hunted for a film for his camera, while his wife watched the object.  She also saw it “jump up and down” and “move from right to left.”  She thought it was followed around by two smaller objects, which darted around the main light.  The plate shows an enlargement from one of Bennett’s pictures.