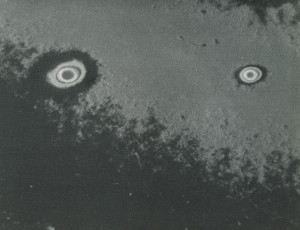 … show you the Montana film.  This film was shot August the fifteenth 1950.  It was taken in Great Falls, Montana, by Nick Mariana.  Immediately after we were notified of the sighting we sent an intelligence man to get a first-hand report.

My name is Nick Mariana.  For the past six years I’ve been the general manager of a minor league baseball club called the Electrics.  We play out of Great Falls Montana and are a farm club for the Brooklyn Dodgers.  On August 15th 1950 at Legion ball park in Great Falls, Montana, after a couple of hours in the clubhouse office, I went up into the grandstand to call the groundskeeper.  As I reached the top of the stairway I glanced northward to the tall Anaconda Copper Company smokestack to check the direction of the wind from the white smoke.  Force of habit, I suppose, because our outfielders use it as an indicator on defensive play.

As I looked up I saw two silvery objects moving swiftly out of the northwest.  They appeared to be moving directly south.  The objects were very bright and about 10,000 feet in the air.  They appeared to be of a bright, shiny metal, like polished silver.  Both were the same size and were travelling at the same rate of speed, which was much slower than the jets which shot by shortly after I filmed the disks.  Suddenly they stopped.  It was then I remembered the camera in the glove compartment of my car.  I raced downstairs, yelling for my secretary, Miss Virginia Raunig.  The distance from the top of the stairway to my car is about 60 feet and I must have made that in about six jumps.  I asked my secretary if she saw anything and she said yes: two silvery spheres.  I unlocked the glove compartment of my car, took out the camera, turned the telephoto lens on the turret into position, set the camera at f/22, picked up the objects in the viewfinder and pressed the trigger.

The disks appeared to be spinning like a top and were about 50 feet across and about 50 yards apart.  I could not see any exhaust, wings or any kind of fuselage.  There was no cabin, no odour, no sound except I thought I heard a whooshing sound when I first saw them.

As the film clicked through the camera, I could see the objects moving southeast behind the General Mills grain building and the black water tank directly south of the ball park.  I filmed the objects until they disappeared into the blue sky behind the water tank.

We will now show the UFO films.

THE MONTANA film (2 objects) was photographed about 11:30 a.m. MST.  During the forenoon the surface wind was 25 to 28 mph; it reached 37 mph at 12:30 p.m.  The objects moved almost directly counter to the wind direction.  They are not balloons.  Studies of the magnified pictures projected frame by frame show the motion of the objects to have been steady and horizontal.  They are definitely not free-falling.  They are not meteors, birds, nor any kind of known aircraft.

This is the Montana film, projected exactly as it was photographed.  The objects are moving against a 25- to 28-mile-an-hour wind.

We will now vary the action and size of the objects and also stop the action from time to time for your study.

We have just made a jump-cut in the film to an enlarged size and reversed the action.  You are now seeing the objects exactly as they were photographed but from a closer perspective.  Analysis reveals that the objects are not balloons, nor any kind of known aircraft.  The images are very different from those produced by any kind of birds any distance.  The shape, brightness, speed, rectilinear path, steady motion and separation rule out various form of optical atmospheric mirages or cloud reflections.  Comprehensive analysis has eliminated meteors and other known natural phenomena.  The possibility of airplane reflection has been carefully studied and ruled out.

A bright flash caught Mariana‘s eye, and he observed two bright silvery objects “like two new dimes”, apparently rotating, flying over the town at an estimated speed of 200 – 400 mph (320 – 640 km/h).  He quickly ran to his car to fetch his 16mm movie camera and filmed the UFOs for sixteen seconds.  Raunig also saw them.  Mariana thought they were about 50 feet (fifteen metres) wide and about 150 feet (45 metres) apart.

Two bright, elliptical objects were seen and filmed from Great Falls (Montana) at 11.25 on… 15 August 1950.  At first they were stationary at about 15º altitude in a north-north-west direction, and seemed to tilt momentarily.  They also seemed to be rotating.  They quickly moved off together, apparently towards the south-west, disappearing in less than twenty seconds.

Mariana showed the film to local community groups; a member of one wrote to Blue Book, and investigators interviewed Mariana in October 1950.  Blue Book‘s conclusion after viewing the film was that the UFOs were a pair of F-94 fighters that landed at Malmstrom AFB only minutes after the sighting.  Mariana maintained both he and Raunig had seen jets in the sky after the UFOs had flown away.

In 1952, Blue Book borrowed the film again.  When it was returned, Mariana said, 30 frames distinctly showing the rotation of the UFOs had been clipped from the film.  The Air Force denied taking more than a single frame, which was damaged.

The 1953 Robertson Panel examined the film and accepted that it showed aircraft.

On the three days I sat in on the series of meetings I was negatively impressed by the relatively few cases examined by the panel.  Several now classic UFO reports were discussed: the famous Tremonton, Utah, and Great Falls, Montana, films were reviewed and summarily dismissed as “seagulls” and “jet aircraft” respectively.

It has been alleged that the objects were sunlight reflecting off two jet aircraft which were known to be in the area on 15 August.  However, the cameraman claimed to have seen the aircraft and the bright objects… (Story 1980).

William Hartmann analyzed the film for the Condon study, and added a new element of mystery to Mariana‘s movie: he found it showed that the UFOs had a constant elliptical shape.  He acknowledged there were “several independent arguments” against the theory that the movie showed aircraft.