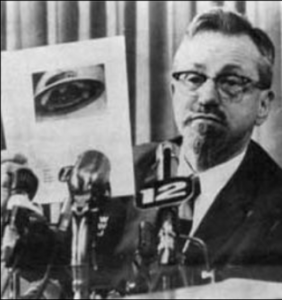 Dr J Allen Hynek was a United States astronomer, professor, and ufologist.  He is perhaps best remembered for his UFO research.  Hynek acted as scientific adviser to UFO studies undertaken by the U.S. Air Force under three consecutive names: Project Sign, Project Grudge and Project Blue Book.  For decades afterwards, he conducted his own independent UFO research, and is widely considered the father of the concept of scientific analysis of both reports and, especially, trace evidence purportedly left by UFOs.

Hynek himself, who served as a consultant to [Projects Sign, Grudge and Blue Book] from 1948 until [Blue Book] was dissolved in December 1969, gradually changed from a skeptic into a believer.