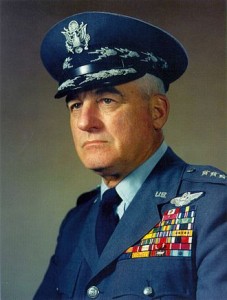 “According to… released documents, Nathan Twining cancelled a previous appointment and rushed to New Mexico on the day of the Roswell saucer crash.”

Brookesmith writes of the secret memo of 1947.09.23 from Nathan Twining to General George Schulgen.

Lieutenant General Nathan F Twining was one of the twelve original members of the Majestic-12 Group extant on 1947.09.24.

“In 1985.07, Shandera found a 1954 memo [the Cutler-Twining memo] to Lt General Twining – former head of Air Materiel Command, now USAF Chief of Staff, and an MJ-12 member, according to [page 002 of the Eisenhower briefing]. The note referred to a briefing by the MJ-12 panel during a National Security Council (NSC) meeting with President Eisenhower on 1954.07.16.”

“Shelley Wells is a former Air Canada stewardess and now works as director of communications for one of the ministries of the Ontario government in Toronto. She is 43, and has a male friend, Lawrence Sherman Jr, who is an architect and former US Air Force Officer who was based in the Pacific. Sherman’s late father was Chairman of the Joint Intelligence staff at the Pentagon and a friend of the late US Air Force general Nathan Twining of MJ-12. Colonel Lawrence Sherman, Sr, was also the Director of USAF Intelligence for the Pacific.”