Alerted by the sound of his dog howling outside, Marius Dewilde, at approximately 10.30 in the evening on 10 September 1954, opened his door and saw two strange humanoids just a few feet away from him.  They were wearing one-piece diving-style suits and their heads were enclosed in enormous globular glass helmets.  They were short and very stocky and the witness does not recall seeing any arms.

Dewilde’s reaction was immediate; he tried to grab the entities but was blinded by a beam of light from an object resting on nearby rail tracks.  As he tried to move he discovered that he was paralyzed in his legs.

[Dewilde] was endeavouring to chase off what he assumed were vandals.  The beam “froze” him in place until it was turned off. 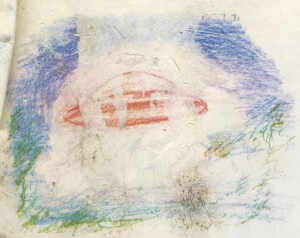 That would be enough for many men but Dewilde was not finished yet.  Having been shocked by the appearance of the entities and prevented from grabbing them, and having been paralyzed by a beam from their craft, once he had regained the use of his limbs he apparently ran towards the UFO in an attempt to catch up with it.  He failed to do so and the object lifted off and flew away.

Dewilde alerted the police and the subsequent investigation involved the French intelligence services and its scientists.  One of the scientists indicated, from the ground traces left at the site of the encounter, that the object resting over the rail tracks must have weighed at least 35 tons.

Heavy indentations in the sleepers were later recorded by the police.

At another landing site, French railway officials calculated that a weight of 30 tons would be required to make the depressions found in some railroad ties where a UFO was reported to have landed.

Both Valensole and Quarouble are typical of those who claim to have seen alien beings at first hand.  The same description of the creatures has been reported time and time again by people scattered all over the globe…

None of the subjects in these encounters was seriously hurt or suffered lasting damage as a result of the light-ray.  The accounts are simple and, it would seem, unelaborate compared to some of the more exotic stories of alien abduction and genetic experiments…

As these cases were influencing judgment in Whitehall, the Pentagon and elsewhere in secret, Blue Book was debunking everything in sight.  Governments almost everywhere else were explaining away sightings as fast as they were made or hiding the best data.  Contactees created amusing headlines, and hysterical protestations about massive cover-ups kept coming from popular writers and the countless private UFO groups now springing up all over the world.

The official view was always that UFOs were nonsense.  [Others maintained] that aliens had landed and the world governments knew this fact for certain…

Amidst all this, in October 1954, the first major wave outside the continental USA struck in France and Italy, spreading also into other countries, including Britain.  For the first time reports of alien entities were coming in.  But these were not from contactees meeting friendly space brothers; they were made by highly credible witnesses.