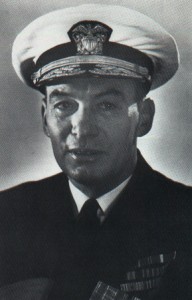 First director of the Central Intelligence Agency created by the National Security Act of 1947.  He served as DCI and director of the CIG and the CIA from May 1, 1947 to October 7, 1950 and after his retirement from the United States Navy was a member of the board of governors of National Investigations Committee On Aerial Phenomena (NICAP) from 1957 to 1962.

Admiral Hillenkoetter was, as of 24 September 1947, MJ-1 – ie head of Majestic-12 after the President of the United States.