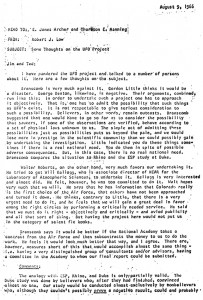 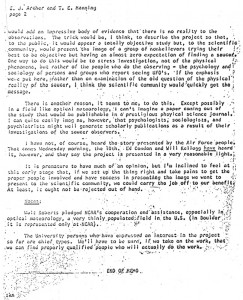 SUBJECT:     Some Thoughts on the UFO Project

I have pondered the UFO project and talked to a number of persons about it. Here are a few thoughts on the subject.

Branscomb is very much against it.  Gordon Little thinks it would be a disaster.  George Denton, likewise, is negative.  Their arguments, combined run like this:  In order to undertake such a project one has to approach it objectively.  That is, one has to admit the possibility that such things as UFO’s exist.  It is not respectable to give serious consideration to such a possibility.  Believers, in other words, remain outcasts.  Branscomb suggested that one would have to go so far as to consider the possibility that saucers, if some of the observations are verified, behave according to a set of physical laws unknown to us.  The simple act of admitting these possibilities just as possibilities puts us beyond the pale, and we would lose more in prestige in the scientific community than we could possibly gain by undertaking the investigation.  Little indicated you do these things sometimes if there is a real national need.  You do them in spite of possible adverse consequences.  But, in this case, there is no real national need.  Branscomb compares the situation to Rhine and the ESP study at Duke.

Walter Roberts, on the other hand, very much favors our undertaking it.  He tried to get Will Kellogg, who is associate director of NCAR for the Laboratory of Atmospheric Sciences, to undertake it.  Kellogg is very interested and almost did.  He felt, however, he was too committed to do it.  Walt hopes very much that we will.  He says that he has information that Colorado really is the first choice of the Air Force, that others have not been approached and turned it down.  He thinks, contrary to Little, that there is a very urgent need to do it, and he feels that we will gain a great deal in favor among the right circles by performing a critically needed service. He said that we must do it right – objectively and critically – and avoid publicity and all that sort of thing.  But having the project here would not put us in the category of scientific kooks.

Branscomb says it would be better if the National Academy takes a contract from the Air Force and then subcontracts the money to us to do the work.  He feels it would look much better that way, and I agree.  There are, however, measures short of this that would accomplish almost the same thing – i.e. having a very distinguished group of consultants and/or advisors, having a committee in the Academy to whom our final report could be submitted.

The analogy with ESP, Rhine, and Duke is only partially valid.  The Duke study was done by believers who, after they had finished, convinced almost no one.  Our study would be conducted almost exclusively by nonbelievers who, although they couldn’t possibly prove a negative result, could and probably

would add an impressive body of evidence that there is no reality to the observations.  The trick would be, I think, to describe the project so that, to the public, it would appear a totally objective study but, to the scientific community, would present the image of a group of nonbelievers trying their best to be objective but having an almost zero expectation of finding a saucer.  One way to do this would be to stress investigation, not of the physical phenomena, but rather of the people who do the observing – the psychology and sociology of persons and groups who report seeing UFO’s.  If the emphasis were put here, rather than on examination of the old question of the physical reality of the saucer, I think the scientific community would quickly get the message.

There is another reason, it seems to me, to do this.  Except possibly in a field like optical meteorology, I can’t imagine a paper coming out of the study that would be publishable in a prestigious physical science journal.  I can quite easily imagine, however, that psychologists, sociologists, and psychiatrists might well generate scholarly publications as a result of their investigations of the saucer observers.

I have not, of course, heard the story presented by the Air Force people.  That comes Wednesday morning, the 10th.  Ed Condon and Will Kellogg have heard it however, and they say the project is presented in a very reasonable light.

It is premature to have much of an opinion, but I’m inclined to feel at this early stage that, if we set up the thing right and take pains to get the proper people involved and have success in presenting the image we want to present to the scientific community, we could carry the job off to our benefit.  At least, it ought not be rejected out of hand.

Walt Roberts pledged NCAR’s cooperation and assistance, especially in optical meteorology, a very thinly populated field in the U.S. (in Boulder it is represented only at NCAR).

The University persons who have expressed an interest in the project so far are chief types.  We’ll have to be sure, if we take on the work, that we can find properly qualified people who will actually do the work.