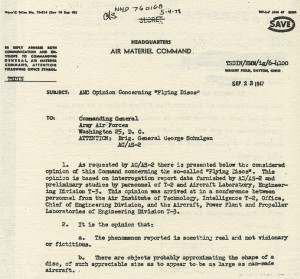 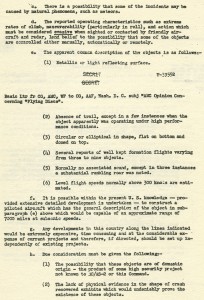 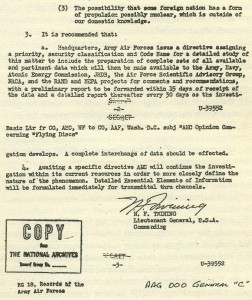 a.  The phenomenon reported is something real and not visionary or fictitious.

b.  There are objects probably approximately the shape of a disc, of such appreciable size as to appear to be as large as man-made aircraft.

c.  There is a possibility that some of the incidents may be caused by natural phenomena, such as meteors.

d.  The reported operating characteristics such as extreme rates of climb, maneuverability (particularly in roll), and action which must be considered evasive when sighted or contacted by friendly aircraft and radar, lend belief to the possibility that some of the objects are controlled either manually, automatically or remotely.

e.  The apparent common description of the objects is as follows:-

(2)  Absence of trail, except in a few instances when the object apparently was operating under high performance conditions.

(3)  Circular or elliptical in shape, flat on bottom and domed on top.

(5)  Normally no associated sound, except in three instances a substantial rumbling roar was noted.

f.  It is possible within the present U. S. knowledge – provided extensive detailed development is undertaken – to construct a piloted aircraft which has the general description of the object in sub-paragraph {illegible} above which would be capable of an approximate range of 7000 miles at subsonic speeds.

g.  Any developments in this country along the lines indicated would be extremely expensive, time consuming and at the considerable expense of current projects and therefore, if directed, should be set up independently of existing projects.

h.  Due consideration must be given the following:-

(1)  The possibility that these objects are of domestic origin – the product of some high security project not known to AC/A5-2 or this Command.

(2)  The lack of physical evidence in the shape of crash recovered exhibits which would undeniably prove the existence of these objects.

(3)  The possibility that some foreign nation has a form of propulsion, possibly nuclear, which is outside of our domestic knowledge.

3.  It is recommended that:

a.  Headquarters, Army Air Forces issue a directive assigning a priority, security classification and Code Name for a detailed study of this matter to include the preparation of complete sets of all available and pertinent data which will then be made available to the Army, Navy, Atomic Energy Commission, JRDB, the Air Force Scientific Advisory Group, NACA, and the RAND and NEPA projects for comments and recommendations, with a preliminary report to be forwarded within 15 days of receipt of the data and a detailed report thereafter every 30 days as the investi-

gation develops. A complete interchange of data should be effected.

4.  Awaiting a specific directive AMC will continue the investigation within its current resources in order to more closely define the nature of the phenomenon. Detailed Essential Elements of Information will be formulated immediately for transmittal thru channels.

On 23 September 1947 Lieutenant-General Nathan F Twining, the head of Air Materiel Command (AMC), sent a memorandum to the commanding general, Army Air Forces (a style used from force of habit, presumably, as the USAAF had become an independent service, the US Air Force, only five days previously).  It was marked for the attention of Brigadier-General George Schulgen, who had asked Twining’s command to assess “the so-called “flying discs”…

There was no hint in Twining’s note that the saucers were “interplanetary”.  In noting the complete absence of any material evidence of the disks, the Lt-General’s staff even… cast doubt on their own proposition that UFOs were “something real and not visionary or fictitious.”

Although sightings were falling off by late summer… analyses of data such as that made by Springer became very influential.  They had persuaded Lieutenant General Nathan Twining, Head of the AMC (Air Materiel Command), to request action.  So on 1947.09.23 he wrote to George Schulgen to conclude firmly that “the phenomenon reported is something real and not visionary or fictitious.”  He urged that a codenamed secret project should be mounted to study the data on a permanent basis, so as to allow the information gathered “(to) be made available to other branches of the military and to scientific agencies with government connections.”

On 30 December 1947, General Twining‘s recommendation of the previous September became reality.  Called Project Sign, the full-time UFO research team was to be part of AMC, based at Wright Field (now Wright-Patterson AFB) in Dayton, Ohio.  Its security classification was the lowest grade, restricted, and it had 2a priority (the highest was 1a).