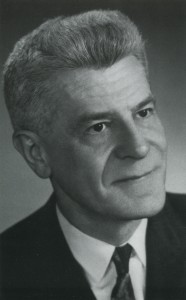 [Wilbert B Smith MSc conducted research into geomagnetic propulsion and was interested in the idea that this was how UFOs manoeuvred.  In short, he was put in touch with Dr Robert I Sarbacher, consultant with the American Research and Development Board, and Smith’s handwritten notes of their discussion detail Sarbacher confirming the reality of UFOs and the extreme secrecy surrounding the matter.  Smith later conveyed salient information from that interview in a top secret memo.]