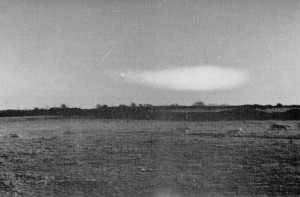 Here is a sighting by reliable witnesses, accompanied by a photograph of impeccable authenticity… which the present writer… can vouch for from start to finish.

The UFO was seen near Cappoquin by Miss Jacqueline Wingfield, who is a colleague of mine, and a Danish girl Miss Lisbet Mortensen, between 3.15 and 3.33 pm on Sunday December 26th, 1965.  Miss Wingfield was driving her car, with Miss Mortensen as a passenger.  The weather was very fine, with a clear blue sky.

They saw a strange object “moving steadily across the sky” in front of them.  They stopped the car…

The girls got out to watch the strange object as it flew steadily across the sky, low down, and making no sound.

In appearance the UFO was curved and elongated, solid-looking, and of a light colour.  Behind it, and seeming almost attached to – rather than emanating from – it, was a “plume”, of flame-like brightness; but this “plume” left no smoke trail, or other wake.

Miss Wingfield found she had not loaded her camera, so called to Miss Mortensen to get hers, which was in the car.  This was done, and she managed to take one photograph before the UFO disappeared in the distance…

On returning to London, Wingfield reported the incident to her colleague and aviation historian Charles Gibbs-Smith.  He took the film for development and examination by a specialist; they concluded that the object was not a conventional aircraft, a balloon, a rocket or a satellite.  Nor was it a meteorite.  Gibbs-Smith, who wrote to the Times about the incident, thought the photograph showed a flying saucer.

Miss Wingfield was somewhat puzzled by the photograph when it was shown to her, as her recollection of the UFO was of a more elongated shape, and of a shorter plume.