From Mr Morgan to Mr Lyon 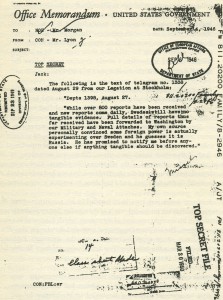 The following is the text of telegram no. 1338 dated August 29 from our Legation at Stockholm:

“While over 800 reports have been received and new reports come daily, Swedes still have no tangible evidence.  Full details of reports thus far received have been forwarded to Washington by our Military and Naval Attaches.  My own source personally convinced some foreign power is actually experimenting over Sweden and he guesses it is Russia.  He has promised to notify me before anyone else if anything tangible should be discovered.”