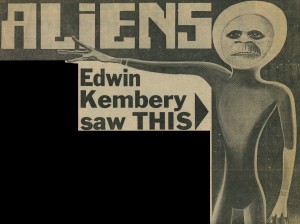 IT happened at midnight in August, 1967.  Edwin Kembery had just found his lost collie in the fields close to his bungalow.

He was returning with the pet, and a fierce Alsatian watchdog, when he saw the shape of a huge cannon shell looming in the eerie gloom at Saddlescombe, Sussex.

“Two strange men appeared at my side,” he says, “Each was about five feet tall.

“They twittered like birds.  Gently, without touching, they led me and the dogs back to the bungalow.

“Inside, I could see them properly.  They were identical with deep-set eyes, flat noses, thin lips and three fingers on each hand.  They had no eyebrows, thin mouths and tiny teeth.  Their skin was dry, creamy like parchment.

“They wore dull grey, tight garments of which the head-piece was like a balaclava.  There were grids at the ear but no bulge to show they actually had ears at all.”

Edwin, a retired audiologist, gave them cheese and biscuits, which they took away.  He offered them whisky, which they spat out.

In return they gave him some “diamonds” and some seeds.  A jeweller certified the stones were, in fact, rock crystal.

He took one to Stricklands, a Hastings plant specialist, but they could not identify it.  Edwin says the plants were killed by frost soon after.

The “men” returned some six more times during the next two months.

Edwin gave them ornaments.  He showed them TV, which amused them.  He noted their bouncing walk, their physical weakness, yet their complete gentleness and lack of fear.

He reported their “visitations” to the police.  “And I got a lot of ridicule for it,” says Edwin.  “Some people suggested I should enter the local asylum.

“But I know what I saw.  It was marvellous.”

He has stuck by his story for the past 20 years.