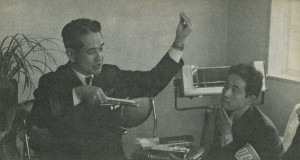 Captain Inaba, pilot of Toa Airways Convair 240 airliner, is see here explaining how on 18 March 1965, a UFO kept pace with his plane for three minutes.  This important sighting occurred over the Seto Inland Sea.

Inaba was the captain of the Convair-240, with 28 passengers aboard, which encountered the oblong and luminescent object over the Ieshima Islands in the Seto Inland Sea at 7.06 pm on Thursday.  Fearing a collision, Inaba turned the plane 60º to the right, but the flying saucer made an abrupt turn and flew along with the plane for about three minutes.

Three Japanese airline pilots reported Friday night that they were “chased by a flying saucer” while they were on their scheduled flights between this city [Hiroshima] and Osaka.  The first to report seeing the so-called flying saucer was Yoshiaka Inaba, pilot of the domestic TOA Airlines, as he was flying his Convair-240 with 40 passengers aboard over Himeji, near Osaka, on his way to Hiroshima, shortly after seven pm.

“A mysterious elliptical luminous object appeared just after I had passed Himeji.  I was flying at the time at an altitude of about 2,000 metres.  The object followed for a while, and then stopped for about three minutes, and then followed along my left wing across the Inland Sea for a distance of about 90 kilometres (55 miles) until we reached Matsuyama on Shikoku Island.  It then disappeared.”

He said the object emitted a greenish-coloured light and violently affected his automatic direction finder and his radio.  He said he tried to contact the Osaka communications tower but was unsuccessful.

His co-pilot Tetsu Umashima tried to contact the Matsuyama tower to report on their observation of the strange object.  While he was trying to do so, he heard the frantic calls from the pilot of a Tokyo Airlines “Apache”, who said he was being chased by a “mysterious luminous object” while he was flying along the northern edge of Matsuyama city.

Inaba, a veteran of twenty years with more than 8,600 hours, said it was the first time in his flying experience that he had ever seen such an object.

(Extracted from the Tokyo Japan Times of March 21; a UPI Agency release originating from Hiroshima)

A group of aviation, astronomical, and defence experts left the United States for Japan today to investigate the reports of a flying saucer seen by Japanese pilots Thursday night, according to a message from US, relayed by the New York Times‘ Tokyo office to the Toa Airlines Office here.

The Americans, “flying saucer experts” from the Defense Department, the Federal Aviation Agency, and the Palomar Astronomical Observatory, want to talk to pilot Yoshiharu Inaba of Toa Airlines and Joji Negishi of Tokyo Airlines.

Inaba was the captain of the Convair-240, with 28 passengers aboard, which encountered the oblong and luminescent object over the Ieshima Islands in the Seto Inland Sea at 7.06 pm on Thursday.  Fearing a collision, Inaba turned the plane 60º to the right, but the flying saucer made an abrupt turn and flew along with the plane for about three minutes.

Negishi, piloting a Piper-Apache, reported seeing the same flying saucer near the same spot within a few minutes of its encounter with the Convair-240.

The sky was clear and the moon was almost full that night.  There was not much possibility that the three pilots – Inaba, Negishi, and Inaba’s co-pilot Tetsu Majima – were deceived by a meteorological phenomenon.  Inaba is a veteran pilot with flying experience of more than twenty years.

A test conducted by the Airlines on Saturday night under similar circumstances ruled out the possibility that the pilots saw the reflection of light from their planes.

The American mission is believed to be interested in the case because there have been several mysterious aviation accidents and flying saucers might have been involved.

(Extract from the Mainichi Daily News (Tokyo) of March 22)