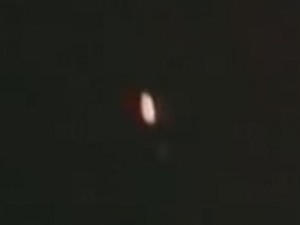 UFO footage from the Russian space station Mir.  The… footage shows a cylinder-type object hovering near the space station.  The camera zooms in on the object.

The video was taken on March 31, 1991.  Mir cosmonaut Musa Manarov filmed the approach of a Progress cargo flight, when he suddenly discovered a cigar-shaped object, floating in space.  He filmed the complete maneuver of the UFO for over two minutes.

“It happened during a visit mission, when all our attention was focused on the slowly approaching space capsule.  I was close to the great porthole, from where I could see our approaching visitors.  I watched everything very carefully…  When the capsule came closer, I filmed it with a professional Betacam camera.  Suddenly I noted something below the spaceship, which first looked like a kind of antenna.  Only when I looked closer and analyzed the situation, I realized that there was no antenna at all.  But first I thought it was a part of the construction.  But then this element started to move.  It moved away from the ship.  So I grabbed the radio and told them: ‘Hey, boys, you are losing something.’

This, of course, alarmed them.  With all my experience, especially with docking maneuvers in space, I can tell you that especially in this phase simply nothing can break off at all.  If something would have been loose, it would have been torn off long before, during the launch, the maneuvers, the turn, all these much more energetic flight phases.  Now we were just gliding slowly towards each other, without any pressure on the capsule.

But then this ‘something’ started to remove downwards.  When it flew away, it attracted all our attention.  It looked like if it was rotating.  It was difficult to estimate its dimensions.  If it was close or far away I could not say, it was in free sight, and in space it is difficult to estimate any size and distance.  I can only say for sure that it was not very close, since I set the camera for infinity.  If it would have been just a screw or something close to us, it would have been out of focus.  The object was quite far away.  In any case at least 300 feet, since this was the distance of the space capsule, and I had the impression that it was beyond it.

It is possible that it was a kind of UFO.  We can’t say with any certainty what it was.  It was definitely not a bigger piece of space junk, no rocket part or so, since this would have been located…  The space surveillance, ours and the American, locate all bigger objects in space.  They are followed, for every minute we know their position and flight direction.  If such an object would have come so close to the Mir, they would have located it and informed us.

I don’t think it was a piece of space junk or debris.  There is a lot of that in the Earth orbit – satellite parts, rocket parts, just everything – but our space surveillance locates them, and according to them there was nothing…”